Exploring the Mysterious Volcanoes of Arizona (Yes, That Arizona) 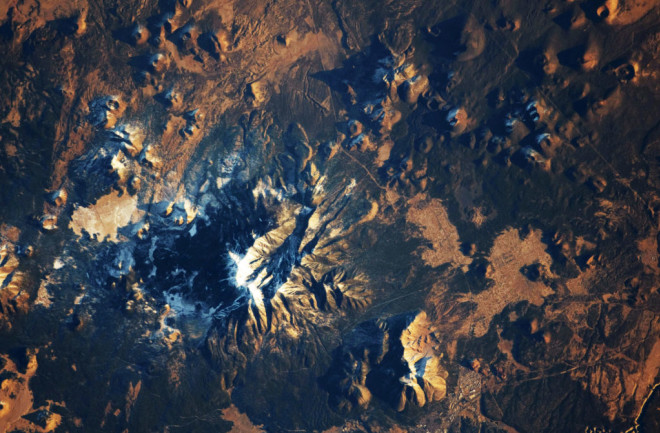 The San Francisco Volcanic Field in Arizona seen from the International Space Station in December 2009.NASA Next week, I'll head off into the wilds of Arizona and Utah to visit some great geologic locales. Along with geoscience students from Denison University, I'll visit classics like the Grand Canyon and Zion---along with a place where only 1,000 years ago, some of the most recent volcanism in the lower 48 states occurred. It is a place where over 600 volcanic vents have been active over the past 6 million years. It is a place where lava flows dammed a river and sent molten rock up and down a canyon for over 10 miles. It is a place where Native Americans likely watched an eruption and made art with the lava that was pouring out over the land. You can see all these sights at the San Francisco volcanic field, near Flagstaff, Arizona. There you'll find terrain coated with basalt lava flows and cinders, a composite volcano that is also the tallest peak in the state of Arizona, and some strange rhyolite domes that produced folded rocks and steep flows. Now, those of you with an idea of what causes volcanic activity are possibly wondering: Why Arizona? It isn't near a subduction zone like the Cascade Range or Aleutians. It seems like a spot that shouldn't see much volcanism at all ... except that Arizona is on the edge of the Basin & Range province, where North America is stretching. Some of the much older volcanism in Arizona comes from this spreading, and the San Francisco volcanic field could be another piece of that puzzle. But it isn't quite that simple. If you look at the composition of the basalt erupted at the San Francisco volcanic field, it looks much more like lava you might expect from Hawaii. This could mean that these volcanoes are fed by mantle plumes under the area---though there isn't a lot of evidence beyond the lava composition. We find a lot of evidence that the basalt that is the source of the SFVF melted the crust under the volcanic field. The lavas are fill of xenoliths, or "foreign rocks". These samples of material from the crust vary from olivine-and-pyroxene-rich chunks that might come from the bottom of the crust all the way to chunks of limestone that come from near the surface. So, what can you see when you visit the San Francisco volcanic field? Well, here's a sample of some of the places I'll get to see for the first time next week.

AlamyMerriam Crater and Grand Falls Merriam Crater and some other nearby volcanic vents erupted ~20,000 years ago (based on exposure dating of the lava flows and paleomagnetism) and sent lava flows over 10 kilometers towards the Little Colorado River canyon. When it reached the canyon, the flows spilled down into the river and blocked it ... and then proceeded to flow up and down the canyon over 15 kilometers. Not only that, but the lava filled the canyon at Grand Falls and continued to flow another kilometer beyond the river. The channel of the Little Colorado River then rerouted around these lava flows (see above). I'm sure it would have been spetacular to see lava pouring into the 65-meter (~215 foot) deep canyon and then continue flowing down the canyon. An ephemeral lake likely formed after the eruption (although the Little Colorado is a very intermittent river) until the new channel was carved.

NASASP Crater In the northern part of the San Francisco volcanic field lies SP Crater and its surrounding sea of volcanic vents. This area of volcanism has been steadily producing eruptions for over a million years---on average, one volcanic eruption every 15,000 years. A study by Conway and others in 1998 put a chance of an eruption in the area of SP Crater at ~13 percent over the next 1,000 years. SP Crater itself (above) is possibly 70,000 years old (although the date is not great and it looks younger than that age) and the youngest, called V4626, was only about 10-16,000 years ago. (And wonder where "SP Crater" got its name? Apparently a rancher in the late 1800's thought it looked like a, well, shit pot.)

UIG/Getty ImagesSunset CraterSunset Crater is the youngest known eruption in the San Francisco volcanic field. It erupted only about 1,000 years ago, when the ancestors to the Pueblo lived in the area. When the eruption occurred, a 10-kilometer fissure opened, creating a "curtain of fire" made from multiple lava fountains that also produced lava flows. Quickly the fissure eruptions coalesced into a single vent that became Sunset Crater. That vent continued to erupt, constructing a 300-meter-tall cinder cone made mostly of loose volcanic debris called "scoria". Cinder cones are prone to breaches that let lava flows escape, and that is what happened at Sunset Crater. Two long lava flows come from the base of the cinder cone: Bonito and Kana'a. In the former, chunks of the cinder cone were carried hundreds of meters away from the cone during the eruption. With people living in the area, you might expect that the eruption had some impact on their lives. There is archaeological evidence that people moved 30 kilometers to the north because much of the area near Sunset Crater was covered in coarse volcanic scoria. However, as you got further away, only volcanic ash fell, which actually helped the growth of crops. There are also "corn rocks" that have impressions of maize cobs and it is speculated that the Native Americans near the eruption may have intentionally put these cobs in/near the lava to make these! We do know that the San Francisco volcanic field is still an active volcanic area, with the highest likelihood of a new eruption coming from somewhere in the eastern part of the volcano field. Any new eruption is likely to take the form of something like Sunset Crater---so probably spectacular, but not particularly dangerous to those living near the field. There is a lot more to see across the San Francisco volcanic field. If you want to take a volcanic vacation, check out a field guide by Sarah Hanson that captures a lot of geology and history of these volcanic wonders. I'm excited to see these for the first time next week on the trip---be sure to watch on Twitter for pictures as we explore the active volcanoes of Arizona.