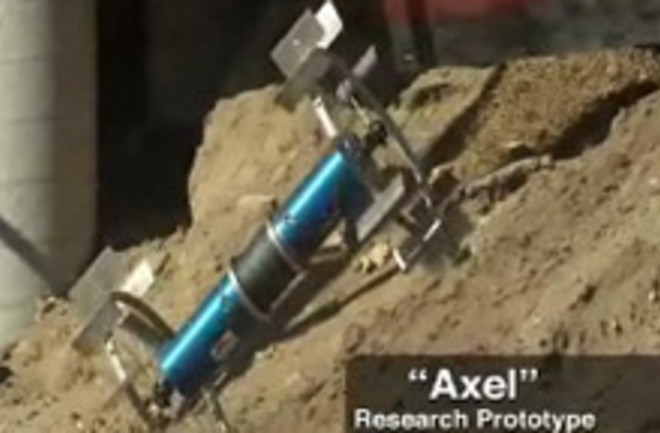 The next-generation Mars rover may be a rough-and-tumble robot that can roll down steep slopes, clamber over rocks, and can even be lowered down cliff faces into deep craters. The prototype, called Axel, takes its name from its simple design--a single axle with two wide, toothed wheels. A video shows that the rover is undeterred by sandy soil, uneven terrain, and other impediments that it can expect to encounter on Mars. Axel is considerably more nimble than the rovers that are currently trekking across the Martian landscape, Spirit and Opportunity.

When faced with the unknown slipperiness of a crater's sloped sides, these part-autonomous robots require huge input and planning on behalf of their Earth-bound controllers--the scene has to be imaged, and the driving route planned with minute precision lest the 'bots six small wheels become irrevocably jammed in the rocks [Fast Company].

The simple bot is powered by

only three motors: one to control each of its two wheels and a third to control a lever. The lever contains a scoop to gather lunar or planetary material for scientists to study, and it also adjusts the robot's two stereo cameras, which can tilt 360 degrees [Universe Today].

The lever can also be used to help maneuver the rover if it does get stuck. Axel's final trick is its tether, which can be attached to another, larger rover. That rover can then lower Axel down like a yo-yo, allowing it to dip in and out of craters. Issa Nesnas of NASA's Jet Propulsion Lab says that

"because Axel is relatively low-mass, a mission may carry a number of Axel rovers. That would give us the opportunity to be more aggressive with the terrain we would explore, while keeping the overall risk manageable" [MSNBC].