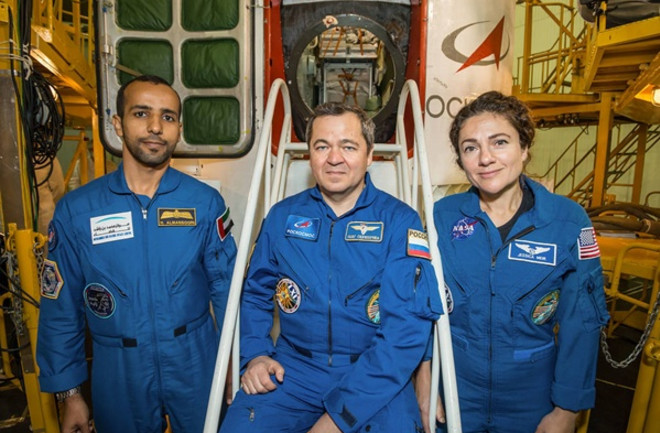 The three crew members in front of the Soyuz MS-15 spacecraft before the launch. (Credit: NASA)

Expedition 61, the next mission to the International Space Station, will launch three crew members in a Soyuz MS-15 rocket on September 25 at 9:57 a.m. EDT from Kazakhstan.

Heading up to the ISS, the crew includes Jessica Meir, a NASA astronaut, Oleg Skripochka, a Russian cosmonaut, and Hazzaa Al Mansoori from the United Arab Emirates.

The flight will take about six hours as the crew makes their way to the station. This will be the first space flight for Meir and Al Mansoori, and the third for Skripochka.

Al Mansoori will be the very first space traveler from the UAE. He and his backup, Sultan Al Neyadi, were both chosen to train and participate in the UAE’s space program. During Al Mansoori’s eight days on the ISS, he will be giving a tour of the space station in Arabic, as well as documenting life on the ISS and conducting Earth observations.

Al Mansoori will spend 10 days in space, returning to Earth with NASA astronaut Nick Hague and Russian cosmonaut Alexander Skvortsov on October 3. With the addition of the next three crew members, the population on the ISS will be at nine until the return at the beginning of the month.

Astronaut Christina Koch will remain on the ISS for all of Expedition 61. She has been a part of Expeditions 59 and 60 as well. Once her time on the ISS is complete after the mission, she will have the record for the longest single spaceflight for a woman at 328 days.

NASA TV will broadcast the launch beginning at 9 a.m. EDT and continue the docking coverage later in the day at 3 p.m. EDT.