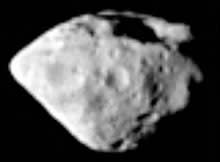 In between Mars and Jupiter, the spacecraft Rosetta buzzed by an asteroid on Friday and snapped photos of the chunk of rock as it hurtled through space. The European Space Agency's spacecraft flew to within 500 miles of the Steins asteroid,

getting a close-up view of the diamond-shaped Steins asteroid, a gray, 3-mile (5-km) wide rock that appears in images as a pock-marked [rock] with multiple craters that ultimately will help determine its age [SPACE.com].

Researchers hope that the Rosetta's observations of the asteroid will shed light on the processes that shaped our solar system.

The rocks are often referred to as "space rubble" because they represent the leftovers that were never incorporated into planets when the Solar System formed 4.6 billion years ago. As with comets, they may contain very primitive materials that have not undergone the constant recycling experienced by, for example, Earth rocks. Rosetta data should therefore help researchers understand better how our local space environment has evolved over time [BBC News].

The photos of Steins revealed a large crater on the northern portion of the asteroid.

At least 15 smaller pockmarks are scattered across the surface. Impacts with other space rocks are rare on an object this small, so the observations suggest that Steins is very old - it has survived long enough to accumulate the craters [New Scientist].

Researchers had hoped for even more detailed images of the rock, but one of the Rosetta's cameras stopped collecting data shortly before the fly-by in a mysterious glitch. The close encounter with Steins was just a warm-up for Rosetta, which is on its way to a more challenging target.

In 2014, Rosetta will rendezvous with the comet 67P/Churyumov-Gerasimenko, releasing a small lander onto the comet's icy surface when it is far from the sun and inactive. Then, for the next two years, Rosetta will chase the comet and lander as they head toward the inner solar system at speeds of over [62,000 miles] per hour [Science News].

DISCOVER has more on the enormous challenges of studying space rocks in the article, "To Catch a Comet." Image: ESA