Europa Is Whistling. Finding The Cause May Solve A Magnetic Mystery 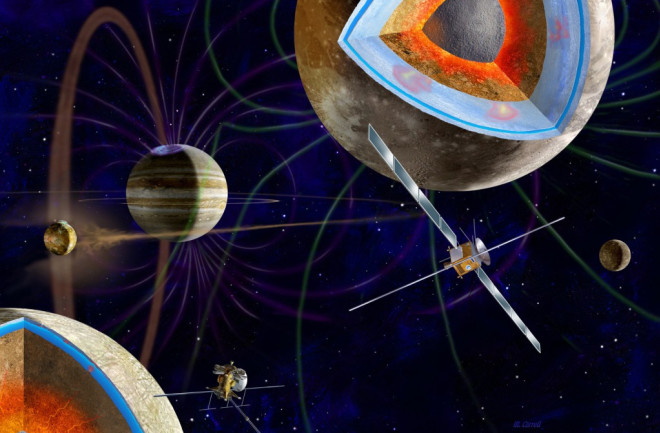 Jupiter's moons put out "whistler" radio waves. Future spacecraft could help unravel their cause. (Credit: ESA/NASA, Artist M. Carroll) Jupiter’s moons “hum” — and researchers are trying to figure out why. New research published Tuesday in Nature Communications details the discovery of “whistler” radio waves coming from two of the moons: Ganymede and Europa. The other two large moons, Io and Callisto, aren’t subject to this phenomena. The finding is interesting because both Europa and Ganymede — the largest moon in the solar system — have subsurface oceans. “Jupiter’s magnetic field is huge, so it provides us a laboratory test,” says study lead author Yuri Shprits of GFZ German Research Centre for Geosciences. “It’s kind of a mini solar system, where you have objects similar to planets that live in the magnetic field of Jupiter similar to planets that live in the magnetosphere of the sun.” In the rest of the solar system, these kinds of whistler waves have various causes. On Earth, the “hum” of the whistlers — which translate to sound you can hear when properly processed — are caused by the Van Allen Radiation belts. Earth’s radiation belts accelerate the particles to high energies, something not seen in the data used in the paper.

Instead, on Jupiter, they’re produced by massive lightning storms. The astronomers used data from NASA’s now-defunct Galileo space probe, which explored Jupiter and its moons from 1995 to 2003. That means the data is old and at times incomplete. It also makes it impossible to follow up on what’s causing the whistler waves. But the existing data suggest that both Europa and Ganymede have some kind of magnetic field coming from within them. These magnetic fields would vie against the massive magnetic field of Jupiter, providing an interesting environment far different than the interactions between Earth and the sun’s magnetic fields. The Europa Clipper and Jupiter Icy Moon Explorer missions could provide more insight. Those will launch next decade, so for now, we’ll need to be content just knowing that the moons hum — but continue working on the exact models as to why.