Europa has a Surprising Lack of Hot Spots to Erupt Plumes 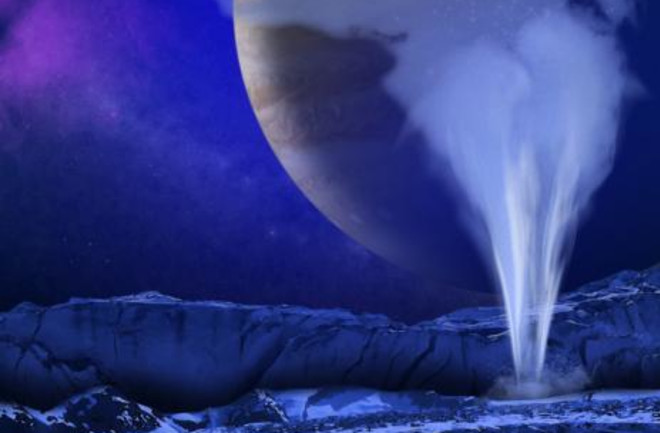 This artist's illustration shows what plumes shooting out of Europa's surface might look like. However, in one new study, scientists found a lack of hotspots on Europa that might signal the existence of plumes. (NASA/ESA/K. Retherford/SWRI) Io, Enceladus, Earth — our solar system holds a number of locations where plumes of gas erupt. And for years, scientists have suspected that such plumes also exist on Jupiter’s moon Europa. However, according to one new study done using decades-old data from NASA's Galileo mission, two potential plume sites on the world lack the hot spot signatures that are typically associated with plumes. “We searched through the available Galileo thermal data at the locations proposed as the sites of potential plumes," Julie Rathbun, a senior scientist at the Planetary Science Institute, said in a statement. "Reanalysis of temperature data from the Galileo mission does not show anything special in the locations where plumes have possibly been observed. There are no hotspot signatures at either of the sites.” Plumes are jets of gas that spring up from the surface or a planet or moon. At locations like Old Faithful in Yellowstone National Park, or at plume sites on icy moons, the energy that pushes the gas out of the ground also heats that area, creating a “hotspot” that scientists can detect. Using temperature data from Galileo, scientists went on a hunt for hot spots, because it could signal the presence of plumes. But, while there were locations of interest on the moon — like an area north of the impact crater Pwyll — where scientists suspected plumes and, therefore, heat, they came up empty-handed. “This is surprising because the Enceladus plumes have a clear thermal signature at their site of origin, so this suggests that either the Europa plumes are very different, or the plumes are only occasional, or that they don’t exist, or that their thermal signature is too small to have been detected by current data,” she added in the statement. "Europa was expected to be active," Rathbun said at a press conference Monday at the Division for Planetary Sciences of the American Astronomical Society 50^th annual meeting, where she presented her findings entitled “A closer look at Galileo Thermal data from possible plume sources near Pwyll, Europa,” but there are a few possible explanations for these findings that don't all rule out the presence of plumes. According to Rathbun, there are four main explanations for these findings. It could be as simple as there not being plumes on Europa. Or Europa's plumes may not be constant. Or, it could be that the moon's plumes are different from others observed on other moons and planets and these plumes "could not be associated with anything hot," Rathbun said. Finally, the hotspots could be smaller than scientists are currently able to detect with existing data.