Eureka and Special Relativity: If Carter Can Do It, So Can You! 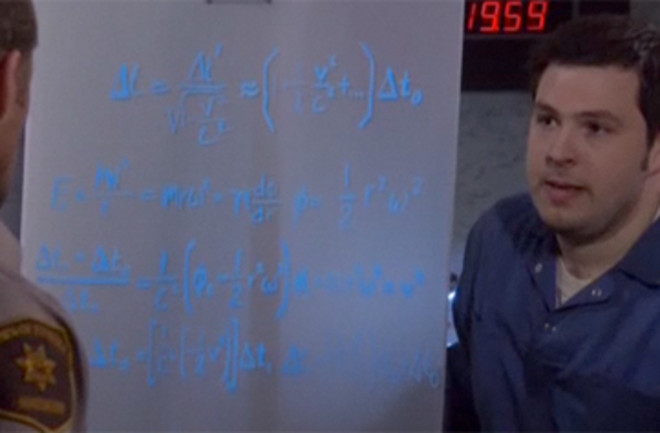 As chance would have it, the night after writing this post about the equations shown in science fiction, an episode of Eureka aired in which Sheriff Carter was faced with the pictured board full of equations. Carter, not the most technical of men, had to learn the equations in order to have chance at stopping a runaway time-loop. The equations looked familiar, so I checked in with Kevin Grazier, Eureka's science advisor, a JPL researcher, and a panelist on DISCOVER's "Science Behind Science Fiction" Panel at this year's Comic-Con. It turns out that Kevin actually wrote the equations, borrowed from a real class he gives that touches on the theories of special and general relativity. The equations refer to how time behaves in Einstein's relativity theory, in particular, the phenomenon of time dilation. The neat part is that pretty much anybody who finished high school can master the math and science behind special relativity's prediction of time dilation (as the title of this post says, if Carter can do it, so can you!). Time dilation occurs noticeably when a object is moving close to the speed of light: imagine a spacecraft shooting by the Earth. From the point of view of someone standing on Earth, time dilation means that time is running slowly onboard the spacecraft. A second on the spaceship could be equal to an hour on Earth. (Time dilation has been experimentally verified using subatomic particles and particle accelerators, but the principle is the same.) The key is this one part of the board, which I've highlighted.

See that bit? The triangle followed by the symbols t' is read as Delta. t' (pronounced t-prime) represents time on board the spaceship. Delta is used to mean "change in" in a lot of scientific equations. Delta-t-prime then is the measured time on board the spaceship. Delta-t (without the prime) is the measured time that is passing on Earth. The factor used to convert between Earth time and spaceship time is the complicated-looking fraction with the square root symbol underneath the delta-t-prime. This is the time-dilation factor, and it's the core of special relativity. The only variable in this factor is v, the velocity of the spaceship. The other symbol, c, stands for the speed of light in a vacuum, which is a universal constant. Using this factor, you can work out for yourself just how fast a spacecraft has to be traveling so that one second of ship time equals one hour of Earth time (it works out to 99.999996 per cent of the speed of light). Working out the time dilation factor from special relativity's first principle, which was Einstein's assumption that the laws of the universe do not change because you are moving relative to some object, requires only a little physics (if you understand that distance equals rate times time, you're there), and some high school algebra. A little more work gets you to one of the biggest equations in science: E=mc2. There are tutorials which will step you through the process: I recommend this one, and this one. (General relativity, which deals with accelerating objects in addition to those moving with a constant velocity as in Special Relativity, is a whole other ball of wax, and requires some serious math, alas) I really recommend you try working through the time dilation derivation: at the end you'll have grasped for yourself one of the most elegant and important elements of modern science and really understood it in the way that scientists do, instead of just through the kinds of wordy explanations that journalists like me fall back on when discussing relativity.