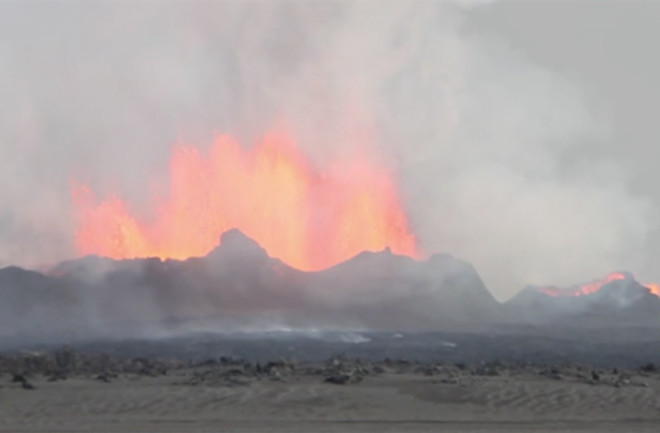 Lava fountaining in the second fissures in the Holuhraun lava field, Iceland, seen on September 4, 2014. Photo by Image from Jonni Productions video. Two updates for today, dominated by action at the two most famous hotspots on the planet: Iceland A new fissure started erupting this morning to the south of the current activity in the Holuhraun lava fields in Iceland. These two new fissures are closer to the Vatnajökull ice cap (just 2 km north of its edge), so concern is growing larger than the eruption will start happening subglacially, potentially causing jökulhlaups (glacial outburst floods) as the lava erupts under the ice. The Icelandic Meteorological Office is also reporting that the cauldron (depression) in Dyngjujökull, the northern part of the ice cap, is getting larger and more pronounced, both of which are signs that more heat is being felt at the bottom of the ice (possibly caused by eruptions under the ~300-350 meters of ice). Check out these images of the cauldron on the ice surface. The most serious ramification is the potential for more explosive style of eruption if water can mix with the lava. So far, the vigor of the eruption at the new fissures is lower than the other active fissures, where lava fountains (see above) are reaching over 100 meters into the air. Be sure to check out these great images of the lava fountaining, spatter cones and lava flows of the larger fissure field. The older lava flow field now covers just over 10 square kilometers. Watch this video to see what it's like to get up close and personal with the lava flows right now. The steam plume from the eruption is reaching 4.5 km (15,000 feet) and the sulfur dioxide plume is beginning to spread beyond the region right around Iceland. Changes in the weather patterns around the island suggest that the plume may spread enough to reach Europe, although the only possible ramifications of that might be some sulfur odor across the British Isles. Hawai'i

Lava flows approaching Kaohe Homesteads on Kilauea's slopes, seen on September 3, 2014. Photo by Hawaii Volcano Observatory / USGS. Meanwhile, in Hawai'i, lava flows are threatening homes on the slopes of Kilauea (see above). The USGS has raised the alert status at Kilauea to its highest - Warning - after lava flows exploiting a ground crack moved downslope and re-emerged near the

Kaohe Homesteads. This lava flow was able to move so much further downslope thanks to the insulating nature of the ground crack, keeping the lava hot enough to flow longer and faster. At the current rates of flow, the lava could reach the Homesteads in 5-7 days if it continues to exploit the ground cracks. Currently, the lava flows are burning their way through the forested lands on the flank of Kilauea. The Hawaii Volcano Observatory has an excellent collection of images of the lava flows, showing how it is advancing towards the homesteads. Although these lava flows aren't a hazard for people as such, previous lava flows have destroyed entire communities on the slopes of the volcano.