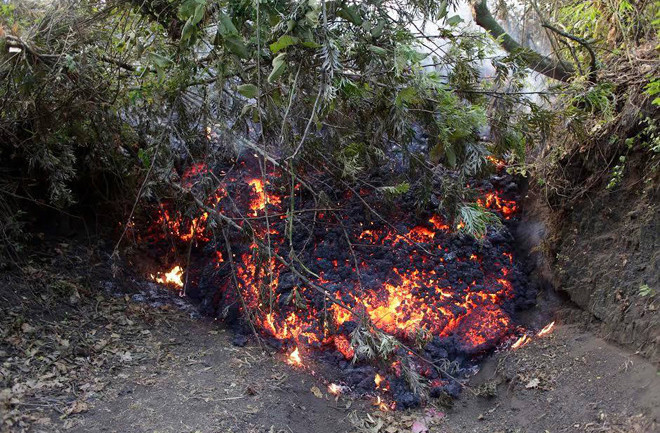 An a'a lava flow from Pacaya in Guatemala burning its way through a forest, seen on January 11, 2014. Image: CONRED. Some volcano news to start off the week of January 13, 2014: Indonesia The eruption at Sinabung is continuing unabated and now evacuees have reached over 25,000. The repeated cycle of dome building and collapse are producing dozens of pyroclastic flows, mainly within 5-7 km of the summit of Sinabung. However, the significant ash fall that accompanies such eruptions has been enough to collapse roofs and destroy homes in villages near the volcano. Ash has also been falling as far as Medan (the capital of North Sumatra), which is ~60 km (35 miles) from Sinabung and Langkat, which is ~77 km (48 miles) away. The economic impact is being felt not only in the agricultural core of the region, but also in tourism. Guatemala Eruptions at Pacaya has also prompted CONRED to call for evacuations, but on a much smaller scale than at Sinabung. Lava flows stretching 3 km from the main summit of the volcano are the cause for this limited evacuation for people living closest to the volcano. Explosive activity has accompanied these lava flows as well -- a very typical behavior for these Strombolian eruptions at Pacaya. Even as basaltic lava, these a'a lava flows (see above) do not move quickly, as these images of CONRED officials examining the flow can attest, so the real hazard is to structures that stand in the path of these extensive lava flows. RussiaShiveluch has started off 2014 with a bang as well. Ash plumes reaching 7-9 km (25,000-30,000 feet) along with pyroclastic flows have been occurring due to the same cycle of dome building and collapse that we're seeing at Sinabung -- a very standard behavior for arc volcanoes like these two. Thanks to its remote location, Shiveluch doesn't pose much in the way of human hazard, but some villages on the Kamchatkan Peninsula have had some minor ash fall due to the eruptions. You might be able to check out the action on the Shiveluch webcam as well. Italy I meant to mention this last week, but Dr. Boris Behncke had a brief post on the rumbling at the Northeast Crater of Etna. Over the past year, much of the action has been at the New Southeast Crater, but that is a recent phenomenon. Although the Northeast Crater has taken a back seat lately, minus some ash emissions, apparently there is some speculation that this could change based on its current state of degassing.