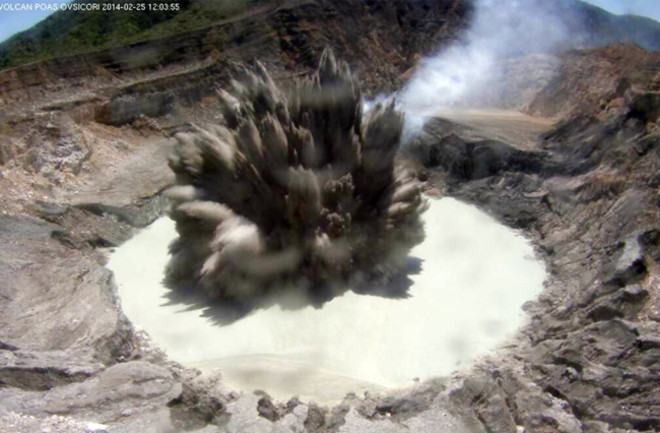 The opening salvo of the eruption at Poás in Costa Rica, captured on the crater webcam. Image: OVSICORI webcam capture. February is already over. However, if you're here in Ohio, don't fool yourself. Spring isn't here -- it was 1F this morning and the Weather Service is predicting a storm of 6+ inches of snow this weekend. Good times! Enough of that, how about some brief tidbits from the world of volcanoes: Costa Rica Earlier this week, Poás in Costa Rica had a small eruption likely related to water flashing to steam in the heating crater lake area. This eruption ended up being the largest so far in 2014, but these types of explosion are fairly common at the Costa Rican volcano. That being said, María Martínez Cruz (OVSICORI) said that the size of this eruption, with a plume that reached 300-meters, is not too common at Poás. This could suggest that more heat is being fed into the upper reaches of the volcano. The webcam at Poás captured the eruption as it occurred, spreading ash mainly within the crater area. If check out the webcam at night, you can see some intense incandesce that betrays the magma just beneath the surface at the volcano. Not surprisingly, the volcano is off-limits to tourists. Indonesia Another Indonesia volcano had a small explosive eruption this week. Marapi (not to be confused with Merapi) erupted on Wednesday (2/26) and the Indonesian government has declared a 3-km exclusion zone around the volcano. The eruption did rain ash on the region near the volcano, apparently damaging crops growing near Marapi. Small explosive eruptions like these are common at Marapi, with at least 4 episodes over the past decade. In news from another Indonesian eruption, apparently a JetStar Airbus A320 flew through part of the ash plume from the February 14, 2014 eruption at Kelud. The engines of the aircraft, flying from Perth to Jakarta, were damaged when it flew through the plume, but JetStar claims it was given no warning about the ash. This is especially perplexing because the Darwin VAAC quickly had ash cloud warnings after the eruption occurred. The engines may need to be replaced at the cost of nearly $20 million. Global Climate A lot has been made of the new study in Nature Geoscience that says the volcanoes slowed the progress of global climate warming. In a sense, we shouldn't be surprised by this as volcanic eruptions will cool the global climate if sufficient volcanic aerosols get injected into the upper atmosphere. What is important that this volcanic "respite" is just that, a temporary slowing down. The effects of volcanic eruptions may last years to decades (if we had a sufficiently massive eruption, which we didn't), but they are temporary -- think of this as if you're hurtling out of control down a hill on roller-skates and you hit a slightly less steep part of the road. Sure, you might slow down, but you're still plummeting.