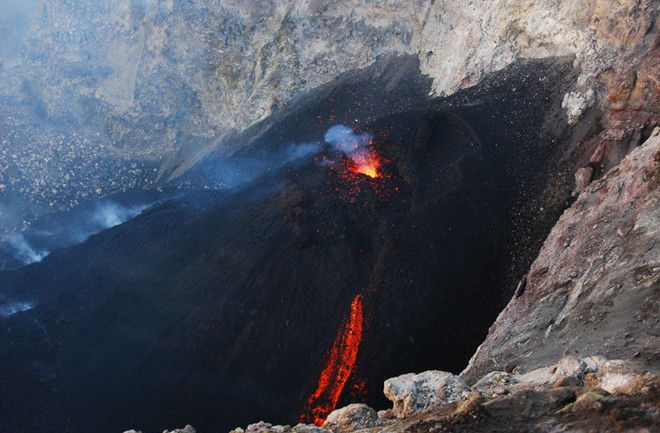 The small tephra cone inside the Bucco Nuovo crater at Etna seen on July 29, 2012. Image by Francesco Ciancitto, courtesy of Osservatorio Etneo. After a few weeks of excitement, mostly thanks to the activity in/around New Zealand, things seems to have quiet back down in the volcanic scene. I'll post a few pieces of news I've seen so far recently while I have the chance. As always, be sure to check out the Smithsonian/USGS Global Volcanism Program's Weekly Volcanic Activity Report for even more news. Italy I haven't mentioned it much, but Etna in Italy has had a number of small, strombolian explosions over the last few weeks. Most of the activity has been confined to inside the Bocca Nuova Crater (see above), creating small lava flows and a tephra cone within the confines of the crater. The Osservatorio Etneo has posted an excellent description of these events with some great images, so be sure to check it out to catch up on a month's worth of activity. As always, you can see a multitude of images taken near Etna on Dr. Boris Behncke's Flickr Photostream as he keeps watch over the volcano. New Zealand Things quieted quickly in New Zealand after the week of activity that captured everyone's attention. GNS Science has lowered the alert status at Tongariro to Level 1 with an Yellow aviation alert after little changes at the volcano since the explosions from earlier this month. Sulfur dioxide measurements have dropped from 2,100 tonnes/day on August 9 to only 380 tonnes/day on August 22, suggesting that the rate of intruding magma may be slowing, but the threat still exists for explosions such as what occurred on August 6. GNS Science has also produced a new volcanic hazard map for an event like the August 6 Te Mari eruption and has warned motorists that occasional floods may occur on SH46 due to dams of debris created by the eruption breaching, showing how even a small eruption can have longer term hazard implications. Meanwhile, there was some buzz over the idea that anthropogenic noise in the Auckland area might cause early detection and locating of the Auckland Volcanic Field more difficult