Erupting Russian Volcanoes Could Make a Mess of Your Flight 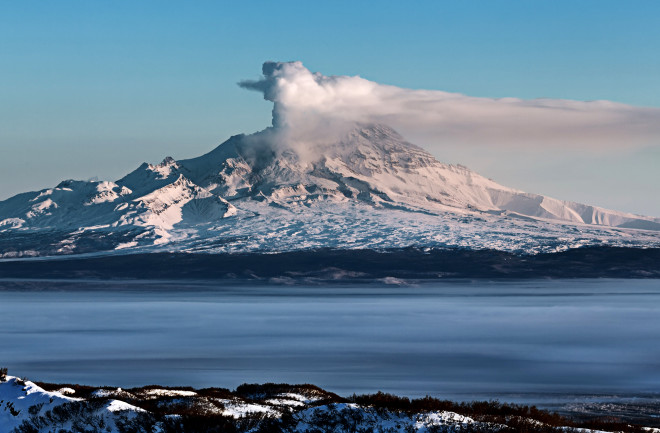 Shiveluch Volcano, Kamchatka Peninsula on January 25, 2016. Getty Images It has been a while since I did an update on the volcanic noise in the Kamchatka Peninsula. This isn't because the remote Russian volcanic province has been quiet. On the contrary, Kamchatka has been as noisy as ever, but news is slow to come out of region. So, I thought it would be good to offer a glimpse into the activity right now. If you check out the latest Smithsonian/USGS Weekly Volcanic Activity Report, three Kamchatkan volcanoes make the report: Kliuchevskoi, Shiveluch, and Karymsky. If you want to include the northern Kuril Islands into the regional volcanism, Alaid can be added to the list. KVERT, the volcano monitoring agency for the peninsula, adds two more volcanoes into their yellow/watch alert: Bezymianny and Zhupanovsky. So, that's six volcanoes on heightened alert status---compare that to the Aleutians (one volcano at Orange: Cleveland) or the Cascades (all green). Really, the bar is at a whole other level when it comes to volcanic activity when you look at arcs like Kamchatka. Probably the only other volcanic arc on Earth that can compete is Indonesia (24! volcanoes at elevated alert status) or Central America/Mexico (at least eight at elevated alert). Over the weekend, Kliuchevskoi, the tallest volcano in the Kamchatka arc, continued its pattern of Strombolian explosions. From the sound of local reports, the ash plume from some of these eruptions have been as high as ~8-9 kilometers (~26,000-29,500 feet) above sea level (so, ~3-5 kilometers over the summit of the edifice). You can sometimes catch these eruptions in progress on one of the KVERT webcams. Similar events are occurring at Shiveluch, except they are being generated by the slow growth (and destruction) of a lava dome at the volcano's active vent. To get a feel for just how active Shiveluch can be, between June 2013 and August 2014, the volcano has had 28 small-to-moderate explosive eruptions---that's almost two per month. This should be no surprise for volcanophiles: Shiveluch might be the most active explosive volcano on Earth over the last 10,000 years.

The volcanic gas and steam plume from Alaid in the northern Kuril Islands. Seen via Aqua's MODIS imager on April 9, 2016.NASA Down at Alaid in the Kuril Islands, the volcano has been producing a plume that has been easy to spot from satellite imagery (see above). Unlike the plumes from Kliuchevskoi and Shiveluch, the plume at Alaid has mainly been volcanic gas/steam rather than an ash-rich plume. Combine that with the thermal anomaly seen by satellites, and this suggests that what is happening at Alaid might be lava extruded at the summit and passively degassing rather than explosively erupting. However, that does mean that something more explosive could happen if that vent starts getting clogging rather than happily degassing. Now, only about 12,000 people live within 100 kilometers of Kliuchevskoi or Shiveluch (and only ~2,000 within 100 kilometers of Alaid), so why should we watch these volcanoes so closely? Well, if you fly from North America and Europe to Asia, you might end up flying over the Kamchatka Peninsula, so knowing exactly where the ash plumes from the volcanoes might be is vital to steer aircraft out of harm's way. As many of you know, ash is very bad for jet aircraft engines (and more), so avoiding even low density ash plumes is vital. Even relatively small eruptions like what Kliuchevskoi or Shiveluch is experiencing now could impact aircraft as the ash drifts hundreds of kilometers to the east into flight corridors (see below).

Commercial airliners flying near the Kamchatka Peninsula in Russia on April 26, 2016.FlightRadar 24 There have been a number of incidents with aircraft and ash, which is why the Volcanic Ash Advisory Centers exist. These global VAACs help alert air traffic controllers and airlines of these ash hazards almost as they happen, using combinations of ground reports, satellite data and monitoring information. Although progress is being made towards allowing the aircraft themselves to identify ash hazards as they approach volcanically-active areas, there is no reliable method for real-time avoidance beyond communication between VAACs and pilots. There have been times that Russia has tried to cut funding for volcano monitoring across the area, which would be a lot of countries' airlines at risk. However, all it takes is one air disaster to see why careful monitoring of even remote volcanoes is necessary for the public good.