Ending The War On Science

I've already explained I'm nonpartisan. I support R's and D's across the Hill for a myriad of reasons. That said, I've been observing firsthand the way funding for innovative scientific research has been repeatedly cut throughout the current administration's reign. In 2002, I spent months preparing a proposal for the 2002 EPA STAR Fellowship application (the only federally-funded graduate fellowships dedicated to environmental research), only to learn funding had been suspended after submitting my project. I've watched friends struggle to find grants to make it through another semester and am sick and tired of how frequently amazing proposals are turned down. I've flipped through the pages of NOAA's budget for FY2007 alongside NASA and DOD counterparts and looked at the laughable difference in figures. 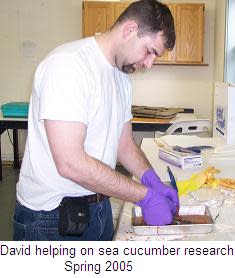 Then in May of 2006, I lost a wonderful friend, David, in a war costing a trillion dollars -- an individual who was poised to become a leader in conservation had he returned from Iraq -- who remains the most promising young scientist I've worked with. Obviously, I strongly support our troops, a separate issue from the war altogether, but it's worth pointing out that half of all discretionary spending is now military. Our tax dollars would be better spent by increasing energy efficiency, renewable energy, and doing some good around the world that would improve relations with our neighbors. My allegiances in the 2008 presidential election will be influenced tremendously by an emphasis on science and integrity. When I chatted with Hillary last year, I was impressed with her intelligence. Her speech last week leaves me hopeful, optimistic, and encouraged that science and innovation might very well become a national priority again.

When science is politicized, when the truth is subjugated by ideology, it's worse than wrong -- it's dangerous. Ending the war on science and once again valuing the ever-skeptical but always hopeful scientific enterprise is about more than our economy. It's about more than our security. It is about our democracy.