Enceladus Could Be Bursting with Evidence of Life 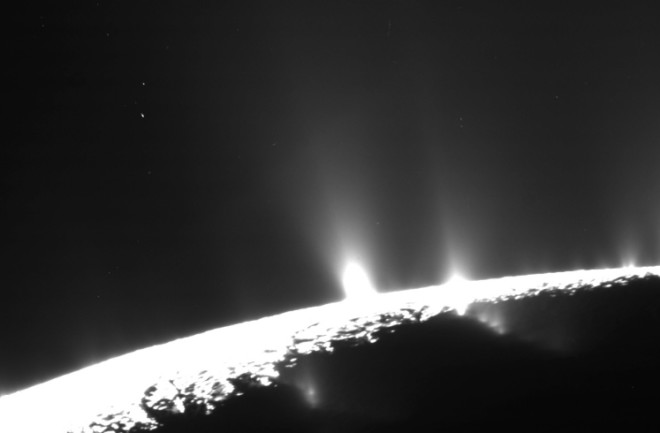 Saturn’s 502km-diameter icy moon Enceladus has fascinated scientists since it was first seen up close by NASA’s Voyager probes in the 1980s. The moon is venting plumes of ice particles into space including traces of methane, carbon and simple organic compounds – making it a good candidate for harboring life.

Now laboratory experiments suggest that chemical reactions between the water of Enceladus’s internal ocean and its rocky core are likely to provide enough energy in the water to feed microbial life – a process similar to that near hot “hydrothermal” vents on the Earth’s ocean floor. The study, published in Nature Communications, predicts that the reactions should create molecular hydrogen that should be detectable in the plumes, which the Cassini probe could corroborate following its flyby on October 28.

Enceladus’ plumes emerge from fissures near its south pole and were discovered in 2005 by the Cassini probe after it had just arrived in orbit about Saturn.

As a result, Cassini was re-tasked to fly through these plumes several times, measuring their composition using instruments originally designed to sample cosmic dust and the outer atmosphere of Saturn’s much larger moon Titan. As well as ice particles it documented traces of methane, ammonia, carbon monoxide, carbon dioxide, simple organic compounds and salts. Microscopic silica “nanoparticles”, about ten nanometers (a hundred thousandth of a millimeter) in size, were also found.

It also recently became clear that the source of the plumes was not merely a vast underground pod of liquid water at the south pole, but an internal ocean of global extent, sandwiched between the icy crust and the rocky core.

The power to drive the plumes must come from heat generated by the varying tidal stresses experienced by Enceladus as it orbits Saturn. The telltale chemistry of the plumes shows interaction between the ocean water and the moon’s rocky core, which is therefore where most of the heat must be generated.

The heat is transferred to the internal ocean by so-called “hydrothermal circulation.” In this process, cold water is drawn down into the rock, where it becomes heated and then escapes back through the ocean floor, enriched in chemicals leached from the rock.

The new study casts more light on what’s going on. The team conducted experiments in which they flushed saline water of compositions thought to exist inside Enceladus through heated powdered rock samples at a pressure equivalent to that within Enceladus.

Their chemical analysis of the resulting hydrothermally altered water across a range of reaction temperatures from 122 to 662 degrees Fahrenheit is a good fit to what is actually documented in the plumes. Notably they found that methane and carbon dioxide can be present at the same time (as observed at Enceladus). They also found that ammonia will survive without being converted to nitrogen, thereby possibly explaining why no nitrogen has been observed in Enceladus’ plumes.

The silica nanoparticles in Enceladus’s plumes originate as particles known as colloids flushed out in the hot water escaping from the altered rock. Moreover, they can best be explained if the rock is similar in composition to carbonaceous chondrites, the most primitive class of meteorites. This suggests that the rocky core of Enceladus formed very early in solar system’s history, and never melted to form a more chemically evolved type of rock.

One thing predicted by these experiments but not yet found at Enceladus is molecular hydrogen, which is an expected byproduct of water-rock interactions. Fortunately the presence of molecular hydrogen in the ocean water can be tested with results from Cassini’s deepest-ever flight through Enceladus’s plumes at a height of only 49km above the surface on October 28.

Enceladus’ plumes makes it a member of a small but distinguished club of moons known to be active. In particular, the reactions between water and hot rock described in the new study, charges the emerging hot water with chemical energy that can be exploited by microbial life.

This happens at hydrothermal vents on Earth’s ocean floor, where microbes get their energy from mediating the chemical reaction that turns dissolved carbon dioxide plus hydrogen into biomass plus methane plus water. This metabolic pathway is described as methanogensis and doesn’t require sunlight. In fact a whole ecosystem can exist supported by methanogenic microbes, rather than by the photosynthetic plants with which we are familiar.

Hydrothermal vents are intriguing when it comes to life. Researchers are investigating them as a possible source of the very origin of life here on Earth. One team is currently trying to copy what they do by building an origin of life reactor.

Whether there is actually any life, microbial or even possibly more advanced, clustered around the hydrothermal vents on the floor of Enceladus’ ocean, is likely to remain a mystery for a while. Even though Enceladus obligingly sprays samples out into space where they can be collected without the expense and technical challenges of landing and finding a way below the ice, Cassini’s instruments were not built to detect and analyze direct tracers for life. However, if it finds molecular hydrogen in the plumes we will know that at least conditions inside Enceladus are highly likely to be suitable for life.

Our next chance to find better evidence depends on NASA funding the Enceladus Life Finder, the ELF mission, or a similar mission for further development.