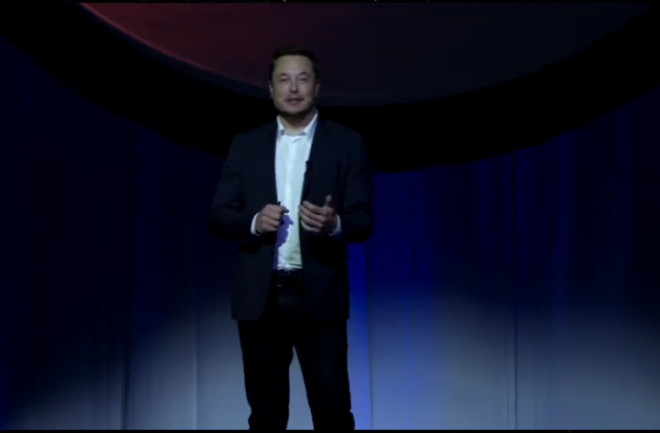 (SpaceX) At the International Astronautical Congress 2016, SpaceX founder Elon Musk outlined his ambitious plan for making humanity a multi-planet civilization. And as expected, his plan starts at Mars. "If we could warm Mars up, we'd have a thick atmosphere and self sustaining oceans," Musk said in his speech. Mars would be just the beginning, according to Musk, with the intended crew craft potentially being useable on any solid surface in the solar system (and maybe a few liquid ones.) Prior to his talk, SpaceX introduced its interplanetary transport plan in a brief video, including an orbital rendezvous to refuel the transport craft before it executes a Hohmann transfer toward the Red Planet. Musk says the plan in the video is fairly close to his actual plans for the ship. At the talk, Musk further expounded on the need to refuel in orbit, saying the cost would skyrocket without refueling in orbit by 500 to 1,000 percent. After each launch, the booster would return to the ground to be refueled and launched again to bring more fuel up. The fuel tank would return as well. The crew transport would have a two-year trip, but reusability could mean being able to send multiple transports in the same launch window.

"You get to use the booster and the tanker as frequently as you like," he said. The booster would use 42 Raptor engines and come in two stages, being overall larger than a Saturn V rocket. It would be able to carry 450 tons of cargo into orbit. The crew compartment includes movie screenings and other amenities to keep passengers entertained in transit. The plan calls for around 100 passengers per trip initially. Musk claims the flights could take as little as 80 days at first, eventually scaling to 30 days — ambitious considering most NASA plans have called for a six-month transit each way. Of course, it all comes at a pretty hefty cost. "We have to learn to improve the cost of trips to Mars by 5 million percent," Musk said. Musk expects to fund the plan through private sector investment, government-assisted public-private partnerships, and revenue from satellite launches and International Space Station resupplies. (The latter assuming that the Falcon 9 and successors stops running in to the two or three speedbumps it's had along the way.) He also mentioned the possibility of testing 25-45 minute cargo deliveries of his cargo craft using suborbital flights to haul freight. Musk outlined the need for reusability as well as in situ resources on Mars to drive that cost down and allow propellant production that could turn Mars into a fueling depot. The plan calls for using deep-cryo methalox (CH4/O2) fuel as it can provide the biggest cost savings and be produced in situ, as compared to hydrogen and oxygen or kerosene. Musk's timeline calls for developing and testing through 2022, with the first mission leaving late 2022 or 2023. Cargo capsules would begin arriving at the planet in 2018, assuming the yet-untested Falcon Heavy arrives on time. He intends to take advantage of the every-two-year launch window to Mars during which it's cost effective. "If things go super well, it might be in a 10-year timeframe," Musk said of the first humans on Mars. "We're going to do our best and make as much progress as possible." Mars would also be a fueling depot in order to explore the outer solar system, with Enceladus, Europa, Titan, and Pluto all mentioned as possible destinations. (Of course, the plan didn't address the deadly doses of radiation tourists would get at Europa thanks to Jupiter's radiation belts.) Musk similarly brushed off radiation concerns about the transit to Mars. "I wouldn't recommend it for interstellar journeys," Musk says, but added that it provides "fuller access to the greater solar system."