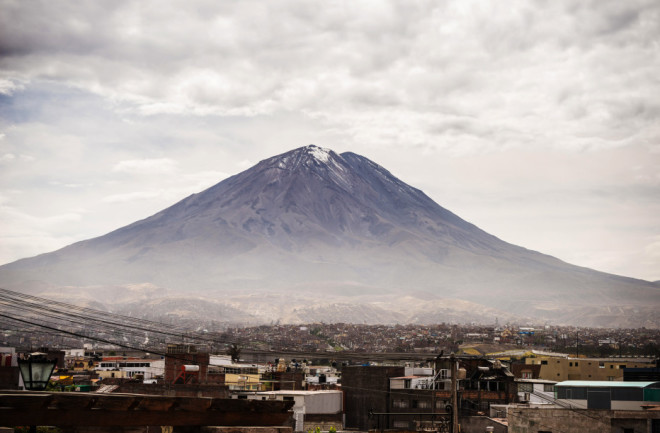 A view of El Misti from the city of Arequipa, taken on August 16, 2015. Alamy Some news from the volcano world this week: Perú The OVS/IG-Peru released a statement this week about the current rumbling at El Misti. The volcano is beginning to show more signs of a potential renewal of eruptive activity, which would be its first since the 15th century. There have been several periods of very intense fumarolic activity at the volcano since that 15th century event, but Peruvian officials are taking no chances as almost 1 million people live within 30 kilometers of the volcano. This statement was meant to be a reminder to the people living in Arequipa that they live next to a potentially active volcano, so they should plan accordingly by not building onto the sides of the volcano or within drainages leading from the volcano. They also remind officials that plans for evacuations should be ready if the need arises. If anything does begin to happen, you can check out an OVI webcam of El Misti. Ecuador There were some strange reports coming out of Ecuador today about steaming ground found ~45 kilometers southwest of Chimborazo, a volcano that hasn't erupted since ~550 A.D. A crack in the ground with steam pouring from it and, in some spots, glowing, was found in Colta. The ground and the crack don't appear to be hot enough to keep people away, as many of the photos show locals and officials getting close to this anomaly. There are no reports of seismicity in the area preceding this event and all the Instituto Geofisica has said is that they are aware of the crack and they are continuing to investigate its nature. Now, some speculated that this crack is actually volcanic in origin---mostly, it seems, based on its vague proximity to Chimborazo. They point to the glowing seen underground at the crack as evidence that this is lava. However, chemical analysis of the steam and gas being emitted found that it was volcanic. The most likely culprit is burning of subsurface organic material---possibly coal or peat---that may have been ignited by fires started by local residents. Economy of Volcanoes In a couple of brief pieces about places where volcanoes have had a strong negative impact of the economy, the island of Montserrat has been tackling how to recover from decades of activity from Soufrière Hills. The limited access to the island caused by the eruption have meant that volcano tourism has been slow to evolve while geothermal energy from the volcano has been slow to develop. However, mining the volcanic sands produced by the eruptions has been fairly profitable for the island. In the United States, a Canadian mining firm is again exploring the idea of mining for metals near Mount St. Helens. Volcanoes can be areas of rich copper, gold, and silver deposits, so the area around the volcano might be a good place to find such valuable metals deposited by hydrothermal fluids or by previous generations of volcanism in the area. A previous attempt to explore for such deposits was stopped when groups protested such use of a National Forest area.