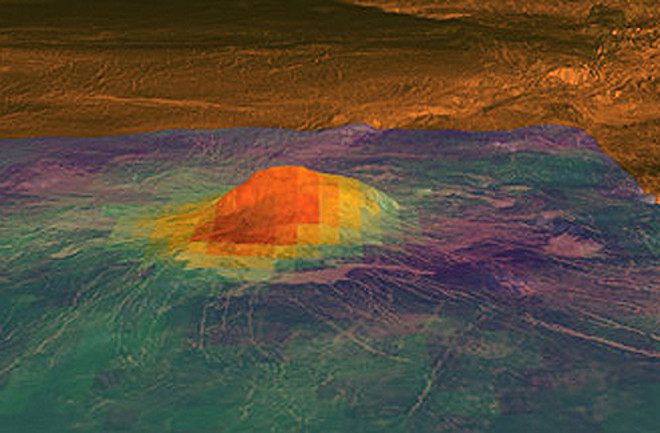 An elevation model of Idunn Mons on Venus, with thermal emissivity data overlain on the surface. Red corresponds to warmer areas. (Credit: NASA/JPL-Caltech/ESA) New research presented this week at the Division of Planetary Sciences meeting in Pasadena, California adds to our understanding of Venus' volcanic past, and possibly, present. Using data from the European Space Agency's Venus Express orbiter, scientists peered through the thick layer of clouds shrouding the plant to analyze the stratigraphy of lava flows discovered on Idunn Mons, a volcano in Venus' southern hemisphere. With additional radar data from NASA's Magellan mission, which visited Venus in the early 1990s, the researchers mapped the path the lava flows carved as they moved down the mountain.  Astronomers first got hints that Venus was geologically active in 2010, after analyzing near-infrared data from Venus Express' VIRTIS (Visible and InfraRed Thermal Imaging Spectrometer) instrument. They found multiple areas on the ground with higher levels of emissivity — an object's ability to emit infrared energy — possibly indicating the presence of magma beneath the surface. They also found evidence that the warmer rocks displayed few signs of weathering, meaning that they were brand new in terms of geological timescales.

Idunn Mons seen from above, with the five areas with lava flows outlined. (Credit: NASA/JPL-Caltech/ESA/DLR) Idunn Mons was one of the areas with warm, fresh rocks found in 2010, and researchers have found even more evidence to link the lava flows to the areas of high emissivity. Using a numerical model, the researchers mapped out the most likely path lava would take as it flowed down the volcano. They found that this path matched up well with the areas identified as being warm, evidence that cooled lava flows sit atop geologically active areas on Venus. "It is the first time that — combining the datasets from two different missions — we can perform a high resolution geologic mapping of a recently active volcanic structure from the surface of a planet other than Earth," said Piero D'Incecco, a co-author of the paper who presented their findings Monday in California, in a statement. Two other papers presented at the meeting help to solidify evidence of ongoing geologic activity on Venus as well. From researchers in the U.S., France and Japan, the papers measured variations in sulfur dioxide levels in Venus' atmosphere over time. Sulfur dioxide is associated with volcanic eruptions here on Earth, and Venus looks extremely similar to the Earth in terms of composition. Both papers note dramatic fluctuations in atmospheric sulfur dioxide levels, sometimes on the scale of just hours. This could be the result of weird weather patterns on Venus, but another theory is that volcanic activity is injecting shots of sulfur dioxide into the atmosphere.

The night side of Venus imaged in infrared by the Akatsuki orbiter. (Credit: JAXA) While the Venus Express orbiter ended its mission in 2014, another satellite, Japan's Akatsuki, is just beginning to send back data. The craft was meant to enter orbit around five years ago, but a clogged check valve prevented it from performing a braking maneuver, sending it on a years-long trip around the sun. Researchers finally regained control of the craft in December of 2015, and it has begun sending back data on atmospheric conditions on Venus from its infrared, ultraviolet and visible spectrum cameras. Unlike previous missions, Akatsuki orbits Venus' equator in the same direction as the planet's clouds, allowing it to perform better, long-term measurements of the complex atmospheric dynamics on Venus.