An Earth-size exoplanet orbits within the habitable zone of the red dwarf. 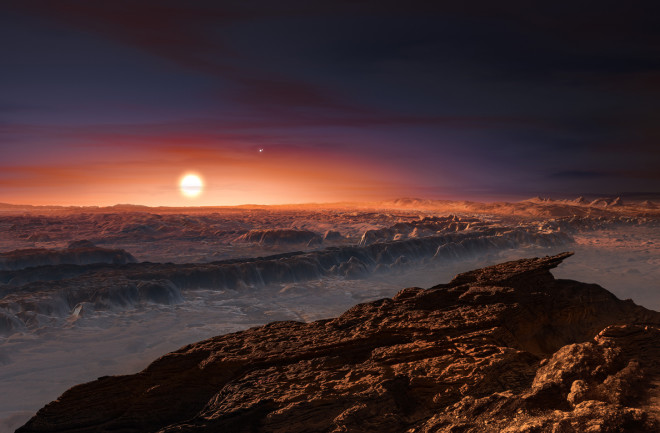 An artist imagines a possible view from Proxima b as Proxima Centauri sets. | ESO/M. Kornmesser

Around the time Earth formed, a slightly larger world coalesced by a much different star. Our sun was a steady, bright-yellow dot in its neighbor’s night sky, but the two stars — and likely their planets — evolved along much different paths. The other star was a red dwarf, dim and cool and prone to violent outbursts. It rained harsh radiation onto its world’s surface, and lit it with the soft orange hue of a perpetual sunset.

That ruddy star was Proxima Centauri, our sun’s nearest stellar neighbor, just 4.2 light-years away. The star’s violent emissions long obscured the planet orbiting it. Thanks to a monthslong observing campaign, however, astronomers deduced and finally confirmed the planet’s existence in August. Dubbed Proxima b, it sits smack in the middle of its star’s habitable zone, where liquid surface water — and thus possibly life — could exist.

Incredibly, the planet’s ghostly signal was hidden in plain sight for decades. In 2014, the international collaboration of scientists known as the Pale Red Dot — named in homage to Carl Sagan, who described Earth as a Pale Blue Dot — banded together after astronomers noticed the periodic signal of a possible planet coming from the star every 11.2 days.

For months last year, the team kept a near-constant vigil on Proxima Centauri, looking for tiny wobbles caused by the pull of an orbiting planet. An analysis of this new data, as well as a simultaneous analysis of decades-old observations, led to the planet’s confirmation, published in Nature.

Proxima Centauri, the nearest star to Earth, is part of the Alpha Centauri triple star system, seen in this view of the southern hemisphere’s night sky. | Skatebiter via Wikimedia

“You take the old data and the new data, and you combine everything together, and then the significance of the detection goes sky high — very, very significant,” says Queen Mary University of London astronomer Guillem Anglada-Escudé, who led the discovery team. The team had to be careful because these small, violent suns have fooled astronomers before. Red dwarfs, by far the most abundant type of star in the galaxy, can create planet-like signals during their powerful flares.

NASA’s Kepler space telescope has detected thousands of exoplanets, so experts aren’t too surprised there’s a planet next door — but they are shocked this one has a shot at hosting life. Proxima b hints that many of the Milky Way’s other roughly 75 billion red dwarfs might also have Earth-like planets. It’s also good news for the Search for Extraterrestrial Intelligence Institute, which in 2016 launched a two-year search for alien signals from the closest 20,000 red dwarfs.

Proxima b closely orbits its star, but because it’s a relatively cool red dwarf, that still puts the world in the habitable zone. | Department of Astronomy/Universidad de Chile/Max Planck Institute for Astronomy

But despite its potential, Proxima b could still be barren. Because Proxima Centauri is so much cooler than our sun, Proxima b is only potentially habitable because it orbits its star much closer than Mercury does the sun. We also don’t know its makeup or if it actually has any water — or even an atmosphere.

Luckily, Proxima b is perfectly placed for follow-up studies. There can be no exoplanet closer. And the next find is already revealing itself. Another periodic signal from the star hints at a second planet — Proxima c. But astronomers still need many more nights at the telescope to know it’s not just the machinations of a violent star.