Earthquake Swarm at Machín in Colombia 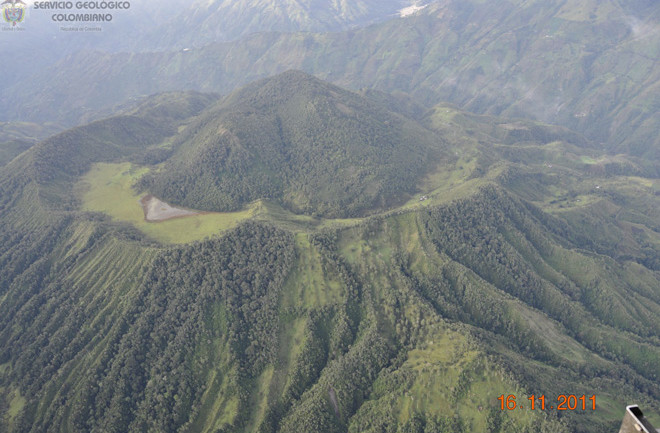 The forested dacite domes of Cerro Machín, nested within an older caldera. Pyroclastic flow deposits from Machín have been traced upwards of 40 kilometers from their source at the volcano. Image: INGEOMINAS, taken November 16, 2011. I like to keep close tabs on the volcanoes in Colombia -- with half of my family living in the country, it seems only appropriate. Some of my first volcanic memories are of seeing firsthand some of the lahar deposits at Nevado del Ruiz from the 1985 eruption. Now, at that time, only two Colombian volcanoes really made any noise: Galeras in the south near Pasto and the aforementioned Ruiz in central Colombia. Nowadays, thanks to increased monitoring on Colombian volcanoes by INGEOMINAS, we know a lot more about the restless nature of the volcanoes of the South American country. Five volcanoes are now on elevated alert status, meaning that they show some level of activity that could lead to an eruption: Ruiz, Galeras, Cumbal, Sotará, Huila and Machín. Over the past week, Cerro Machín, a dacite dome complex to the to the south Ruiz near Ibagué, has been feeling some increased seismicity. The INGEOMINAS special bulletin details a M2.9 earthquake that occurred at a depth of ~4.7 km beneath the volcano that was felt by local residents. This was part of a swarm that produced over 210 earthquakes in a few hours on February 10 -- all within 2 and 5 km depth, but all very small. Now, before you need to get too nervous about this activity, INGEOMINAS rightly points out that these swarms have occurred before at Machin and that sensitive new seismometers are likely to notice this type of activity that might not have been noticed in the past. Not a lot to see, but in the small chance that Machín does get more active, the Observatorio Manizales has a webcam pointed at the volcano. Machín's last known eruption was over 800 years ago. Right now, the most active volcano in Colombia is still Nevado del Ruiz. The volcano is still experiencing elevated seismicity, along with a ~950 meter steam plume that occasionally has minor ash as well -- which can be seen via webcam, weather permitting. Hopefully when I'm in Pereira this spring, I'll get a chance to see the volcanoes up close!