Type Ia supernovae are very important exploding stars. It's thought that this particular type of supernova has a very special property: they all explode with about the same energy. This makes them very valuable, because it means that if you can simply measure how bright they appear to be, you can figure out how far away they are. It's like seeing headlights on the highway; dim ones are far away, and bright ones are close. 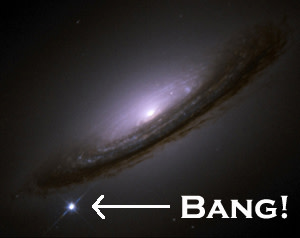 Of course, in reality, it's not that easy. But after a Herculean effort, astronomers in the late 1990s figured they had been able to account for any small differences in brightness and could use these stars as "standard candles", benchmarks to calculate cosmic distances. Because they're so bright, they make great milestones because they can be seen pretty much all the way to the edge of the observable Universe. The thing is, it's not clear how a type Ia actually forms. There are two models, both involving white dwarfs. These are the ultradense remnants of dead stars, the exposed cores of stars after they shed their outer layers. The Sun will one day be a white dwarf (in about 6 - 7 billion years, so don't hold your breath). Because of complicated quantum physics, it turns out that white dwarfs can only have so much mass; if they exceed about 1.4 times the mass of the Sun they can collapse, either forming an even denser neutron star, or exploding as a supernova. 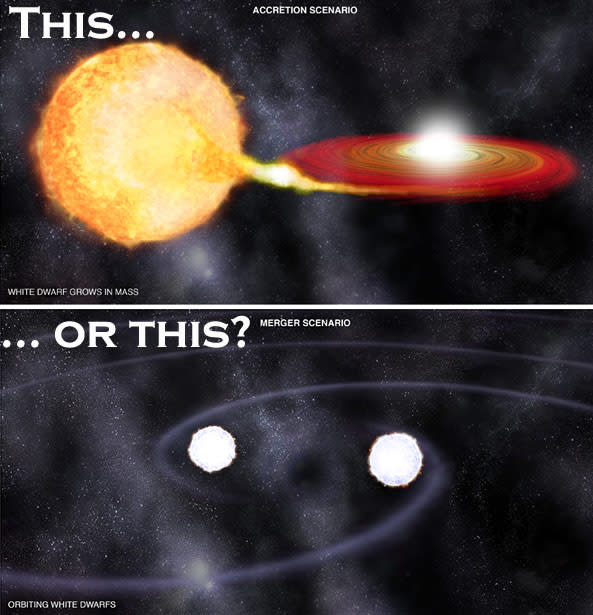 The first model of a Type Ia is a white dwarf orbiting a star like the Sun. The intense gravity of the dwarf draws material off the normal star, a process called accretion. The matter piles up, the mass limit is exceeded, and BANG! Supernova. Well, it's a lot more complicated than that, but close enough. The second idea is that you have two white dwarfs orbiting each other. Over time they spiral in (this time due to relativistic effects called gravitational waves), get too close together, merge, and BANG! Supernova. Astronomers have always assumed that the accretion scenario is the far more common of the two, because it takes a long time for two dwarfs to merge, whereas accretion can happen easily if a dwarf happens to be paired up with a normal star (which should be pretty common). But how do you tell which is which? It turns out that the two different scenarios leading up to the explosion have two very different effects: accretion makes a lot of X-rays, while a merger does not. So astronomers did what you'd expect: they pointed the Chandra X-Ray Observatory at a bunch of galaxies and observed supernovae. What they found was pretty surprising: the amount of X-rays from Type Ia supernovae in nearby galaxies was 30 - 50 times lower than what would be expected from accretion. In other words, their observations strongly favor the idea that it's the merger of white dwarfs that cause Type Ia supernovae. Well! I was pretty surprised to hear that. Like other astronomers, I figured it was accretion that was the culprit. Now mind you, there are some caveats here. They observed elliptical galaxies, which tend to have an older population than spirals, so you might see more mergers than accretions. Also, it's possible things were different in the past, and when we observe very distant galaxies were seeing them as they were billions of years ago. But still, you just don't expect to see what the astronomers saw, so it seems to me like they're on to something here. This has some interesting ramifications. It certainly affects a lot of fields of astronomy, like how binary stars form and change over time. But it may also affect cosmology, the study of the birth, evolution, and eventual fate of the Universe itself. If Type Ias are caused by a different scenario than previously thought, could it mean that our measurements of the distant Universe are wrong? I asked this question specifically at the Chandra press conference, and was told that the two different scenarios produce explosions with pretty much the same energy, so this may only affect cosmological measurements a small amount. However, right now our theoretical models of the merger scenario are still pretty rough, so it's unclear if the peak brightnesses of the two models are the same. This may affect our measurements of dark energy, the mysterious pressure that seems to be accelerating the expansion of the Universe. My gut reaction is that this won't matter a huge amount, since we have lots of independent ways of measuring dark energy, and they all appear to be in rough agreement. But this means we have one more thing to take into account in those measurements. And it may prove to be useful; if we can distinguish between the two supernova generators, our measurements will get that much more accurate. I have to say I'm pleased with this; I studied supernovae in college and grad school, eventually studying one for my PhD (though it was of an entirely different flavor from this kind). I remember reading a long technical paper about the different Type Ia scenarios back then: it's been a mystery for a long, long time. But with perseverance, the right equipment, and more than a touch of cleverness, we're a big step closer to figuring this all out!