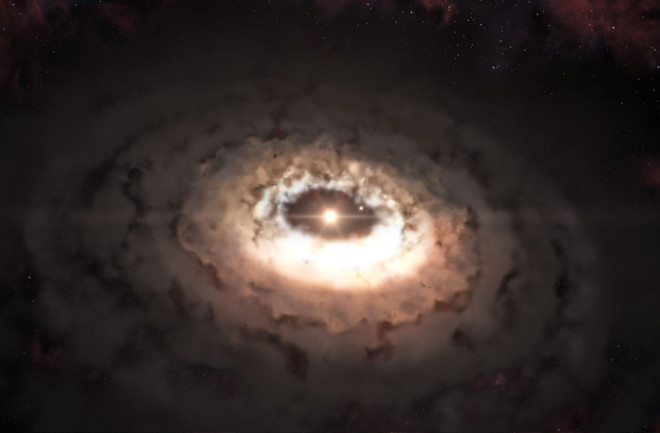 This artist's impression shows the dust trap in the system Oph-IRS 48. Credit: ESO/L. Calçada It’s always sobering to remember how much we still don’t know about the universe. Despite finding hundreds of exoplanetary systems and numerous stars surrounded by proto-planetary disks of gas and dust, it’s still not clear how the latter become the former. But observations by the recently-opened Atacama Large Millimeter/submillimeter Array (ALMA) have shed light on this question by finding a “safe haven” for growing pre-planets around a relatively nearby star. Scientists generally agree that the dust around a young star could eventually become a planetary system through the clumping together of individual particles: enough time and enough clumping could produce comets, asteroids and planets. But a major problem was explaining how slightly larger dust grains (on the orders of millimeters instead of micrometers) could clump together at all. Crash together too quickly and the grains fragment into tinier pieces; worse, these larger objects would be more likely to fall victim to their star’s gravity, falling into it and being destroyed. But because planets clearly exist, something must be providing these larger dust particles an opportunity to clump together in just the right way. Astronomers had suggested the existence of “dust traps,” but none had ever been found. These would be holding pens for the dust in the form of small vortices, which could serve to strongly concentrate larger dust grains. So concentrated, the dust could accumulate and grow into kilometer-sized parts, paving the way for planet formation. Now the star system Oph IRS 48, about 390 light-years away, appears to display just that: a clear clump of larger dust particles within the disk. The crescent-shaped area on one side of the disk is, clearly, a dust trap. It produces a small vortex in the disk, basically an eddy in the current of material flowing around the star. Another large object (either a large planet or a brown dwarf) has carved out a gap in the disk, making it possible for such a vortex to form from the turbulence at the edge of the gap. The results are reported today in Science. While this particular dust trap is unlikely ever to result in full-fledged planets—it’s too far from its star, about 63 times the average Earth-Sun distance, to form anything bigger than a comet—it still provides evidence that dust traps do exist. And because future ALMA data will be even more detailed (these observations were made during the observatory’s construction), scientists hope one day to spot a much closer dust trap around another star system, one that could produce planets.