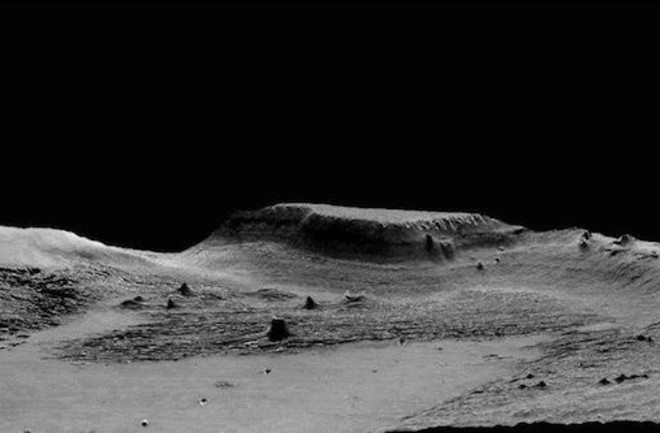 The image shows part of the Medusae Fossae Formation that's been subject to intense erosion over the last 3 billion years. (Credit: High Resolution Stereo Camera/ESA) As luck would have it, Mars will remain engulfed in a colossal dust storm as it reaches opposition on July 27. The viewing conditions might be abysmal, but astronomers can at least take solace in a long-awaited Martian mystery being solved — where all of this dust is coming from. New research published in the journal Nature Communications revealed that the massive amounts of dust are tied to Mars’ Medusae Fossae Formation (MFF), the largest explosive volcanic ash deposit in the solar system. Researchers from Johns Hopkins University found that Martian winds are gradually eroding the volcanic remnants, which cemented in place billions of years ago. The winds transform them into the fine dust particles that take over the planet during global and seasonal storms. NASA’s Mariner Spacecraft first discovered the 1.25 million square mile (2 million square kilometer) formation in the 1960s, but its origins remained a mystery until recently. Researchers could tell from radar imaging that it had a strange composition, but they weren’t sure if water, ice, wind or a volcanic activity caused the peculiar structure. However, research published in May used gravity data from multiple Mars orbiters to measure the density of the formation. The results showed that it’s only about two thirds as dense as your typical Martian surface and that it doesn’t contain any ice — a composition that can only be explained by volcanic eruptions. And because of its porous nature, the MFF has fallen victim to Martian winds and significant erosion over the years. When remnants of powerful volcanic eruptions formed the structure over 3 billion years ago, it was about half the size of the United States. Now, it would cover just 20 percent of the U.S. So where did all of its sediment go?

The dust storm was first detected on May 30 by NASA’s Mars Reconnaissance Orbiter, and has since expanded to cover nearly its entire surface. (Credit: NASA/JPL-Caltech/MSSS) To find out if it could be contributing to Mars' epic dust, the Johns Hopkins researchers compared the composition of surface dust to the composition of Medusae Fossae. Multiple Mars landers and rovers have collected dust samples from various parts of the planet. The scientists say they all contained an abundance of sulfur and chlorine - in a very specific ratio. Using data from NASA's 2001 Mars Odyssey spacecraft, the researchers found that the ratio of the volcanic region matched that of Mars’ surface dust — suggesting that the volcanic deposit is the largest contributor to Martian dust. And based on its erosion rate, the scientists were able to calculate the amount of dust on Mars’ surface. They found that there’s enough to cover the entire planet in roughly six to 40 feet (2 to 12 meters) of sediment. And the dust will keep building up as Medusae Fossae continues to erode. The increasing amount of dust not only causes thicker storms, but it also contributes to their intensity. The dust absorbs some of Mars’ solar radiation, which causes surface temperatures to decrease and atmospheric temperatures to increase. These temperature variations make winds stronger than usual, releasing even more dust that gusts across the surface during storms. These conditions may have created a powerful global dust storm during our prime time for viewing Mars in the night sky, but the unfortunate coincidence wasn’t exactly a surprise. Global storms pop up every six to eight years or so, and it just so happened to interrupt Mars at its brightest this time around. But at the end of the day, we’ve gained crucial knowledge of the Red Planet’s history and finally know the source of the swirling, engulfing dust that’s blocking our otherwise wondrous view.