Driving Through Martian Storms on Earth

In a parched Nevada valley, scientists pursue miniature cousins of the whirlwinds that rage across the surface of the Red Planet. 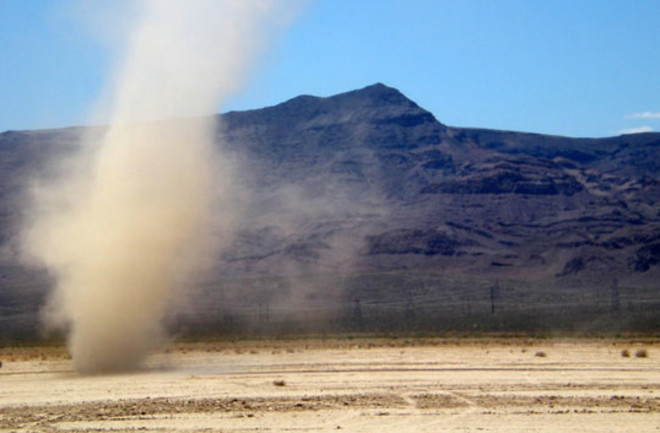 A dust devil photographed by Tim Michaels creates a vortex that sucks sand tons of meters into the air. | Timothy I. Michaels

El Dorado Valley, Nevada—For the first few hours it seemed as though nothing at all might happen. We would just roast out here all day in the 110-degree desert heat, staring across the expanse of dried-up lake bed without seeing any sign of the “dust devils” (video)—mini-tornadoes—that the scientists and arrays of instruments stood ready to record.

Dust devils, I’d learned before coming here, materialize suddenly in fair weather over very dry ground. All it takes is sunlight and a rising vortex of air to pick up some loose surface sand or dirt and whip the particles into a faint, slender funnel cloud. On Earth, the whirlwinds disintegrate within moments, without inflicting damage on anyone or anything. But on Mars, similar storms unfold on a much larger scale (photograph; video). Dust devils dominate the weather patterns on the Red Planet, sculpting its surface and potentially threatening future robotic explorers or visiting astronauts. Researchers need much more data on how dust devils form and behave in order to construct a meaningful model of Martian climate. This corner of Nevada offers one of the best and most accessible arenas for studying the phenomenon.

Still nothing. Tim Michaels of the Southwest Research Institute in Boulder, Colorado, and Aymeric Spiga from Université Pierre et Marie Curie, Paris, two atmospheric modelers, wax philosophical over bottles of Gatorade. A day when nothing happens, they assure me, is as important as a day of frantic activity: Since no one knows precisely why dust devils form where and when they do, being able to say for sure what does not cause them would represent progress of a kind.

Then our luck turns—in a tall, filmy, swirling pillar that is either a dust devil or a mirage. “Let’s take a picture,” Asmin “Oz” Pathare of the Planetary Science Institute says into his walkie-talkie, a hundred yards away from us. “Three, two, one, go.” As Oz aims and fires the camera on his tripod at Spotter Station A, Patrick Russell from the Smithsonian National Air and Space Museum, standing behind a similarly mounted camera at our Spotter Station B, snaps the same view from a different angle.

Tim and Aymeric point out how the dust devil makes the movement of the air visible. All around us, they say, atmospheric currents tumble in cyclonic or anticyclonic patterns that remain hidden until a dust devil paints them brown.

“Another,” Oz says as the dust devil travels more or less northwest through the study area. “Three, two, one, go.” Weeks from now, after this phase of field activity ends, he will superimpose today’s images on a painstakingly constructed panoramic photomontage of the site, the better to trace each dust devil’s path. For now, Martin Towner of Imperial College London draws the apparent track in pencil on a survey map. His Survey Station (the back end of a rented, dust-encrusted SUV) forms a triangle with the two Spotter Stations (folding canvas sling chairs under beach umbrellas). Martin describes this particular dust devil in coded terminology as a “tiny faint short.” That means it appeared to be less than two meters in diameter, contained so little dust as to remain virtually transparent, and lasted just slightly longer than five seconds, which is the low-end cutoff duration for logging a dust devil in a day’s record of observations.

Martian dust devils unfold on a whole different scale. They grow to gigantic proportions, lifting tons of dust several kilometers high into the orange skies, where the particles hang as haze before drifting back down to the surface. Dust devils occur virtually everywhere on the planet, except for the north and south poles, which lie under layers of wet and dry ice. So far, no dust devil has harmed any spacecraft there. On the contrary, passing dust devils have lent NASA invaluable assistance more than once by whizzing over a stalled Mars rover, sweeping its solar panels clean, so the sun can recharge the craft’s batteries. NASA hopes these close-up Earth-side investigations will help parse the dust devils on Mars, which strongly influence the climate and the erosion of the planet’s surface.

“There’s one right behind you guys,” the walkie-talkie announces in the voice of Harvey Elliott, a graduate student from the University of Michigan. His station consists of a tall pole fitted with sensors that monitor the electric field at four different heights inside passing dust devils. These electric field measurements suggest that dust devils carry a positive charge created by larger particles rubbing together at the base and a negative charge created by smaller particles at the top.

Because the sensors on the Michigan mast are battery powered, the researchers have to break down the pole every day and take the equipment back to their motel headquarters to recharge it. Two other masts hold anemometers, barometers, and thermometers that need no daily energy boost; these instruments stay in place throughout the two-week observing run. Oz visits them daily to download the latest data onto a laptop.

“Not worried about theft?” I ask as I watch him do this. The off-road site is accessible to workers who maintain the power lines from nearby Hoover Dam to Las Vegas and Los Angeles, not to mention the recreational dirt bikers who occasionally zoom around the site’s perimeter.

“No,” is his terse reply. In fact, the team members often lament that the teenage bikers never approach them to ask what they’re doing with all their geeky paraphernalia.

At the northern edge of the study site, José Verdasca and Eduardo Sebastián Martínez of the Centro de Astrobiología, a public research laboratory in Madrid, are testing dust devil detection equipment they have designed to fly on NASA’s next Mars mission—a car-size ranging rover called Curiosity, to be launched in fall 2011. They have with them their engineering prototype, which they’ve partially disabled for its own safety. The barometer, for example, would choke on the surface pressure of Earth’s atmosphere, 100 times that of Mars. Temperatures here also shoot far higher than anything on the Red Planet. José and Eduardo recently took the prototype to Antarctica, where conditions more closely approximate the Martian chill.

A quick check of weather statistics reveals the air temperature is 111.2 degrees Fahrenheit, while the ground is considerably hotter, at 141ºF. A black rock on the ground has reached 148. The humidity hovers at an astoundingly low 7 percent. Clouds in the distance trail tendrils of rain that evaporates long before reaching the ground. Similarly, we’re all obeying the desert safety regulations that require us to drink a bottle of water with electrolytes every 15 to 20 minutes, but the fluid just turns to sweat and evaporates, seeming to bypass the bladder altogether.

The dust devils increase in frequency around 1 p.m. Steve Metzger of the Planetary Science Institute drives into their path in an ’83 Chevy pickup laden with sensors to track their internal wind speeds and other characteristics. The battered old truck rattles at full throttle across the desert carrying its cameras and other instrumentation on a lancelike extension ladder bolted to the roof of the cab—a research-oriented Don Quixote.

I get to ride in the passenger seat as Metzger tilts at a few dust devils. He leaves the windows open so he can feel what his sensors are recording, and I tuck my knees under a makeshift dashboard desk that holds two laptops tied down by bungee cords. Metzger has his finest hour later in the afternoon, driving solo through the biggest catch of the day—number 71, a “large dusty long” that completely envelops him and the truck in a kilometer-high brown column lasting a full five minutes. “I couldn’t see a thing,” he reports, smiling, as he dismounts to compare notes with his equipment.

The huge dust devil has also run right over Harvey’s station at the Michigan mast. We can see him in the distance, covered with dust. “I would just like to say,” he says earnestly into the walkie-talkie, “I love my job!” Oz, too, a veteran of many such vigils, rhapsodizes about the emotional engagement of this specialized brand of storm chasing. “I’m an ice guy, not a dust modeler,” he confesses. “I didn’t expect to care so much.”