Drilling Chicxulub: Journey to the Center of an Apocalypse 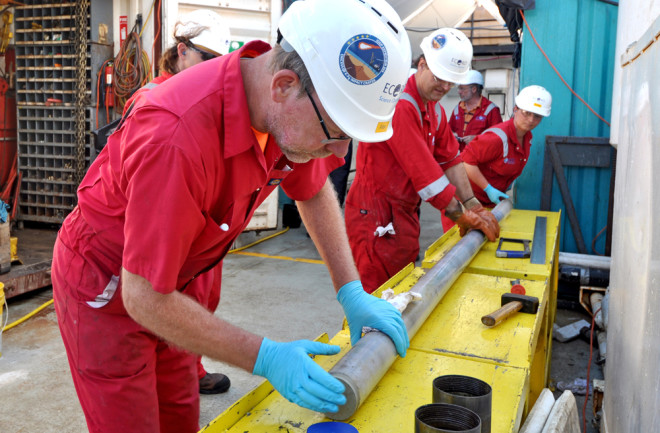 Scientists spring into action as each core section reaches the platform, recording temperature data, acidity levels, microbiological activity, and other information that would be lost before the cores make it back to the main laboratory. (Credit: Eric Betz/Discover) I step forward and drop my backpack onto the open-air basket parked on our supply vessel floating 19 miles off Mexico’s Yucatan coast. A crewmember helps me secure my life jacket. “Do I need to clip in?” I ask my chaperone. “No, just hold on,” he says. And with that, a crane vaults us up and up. My free hand clutches rope while the other grips my camera. Blasting off photos distracts from the towering heights some five stories off the water. Even from our bird’s eye view, there’s no coastline in sight – only clear blue skies and the rough, white-capped waves of the Gulf of Mexico. My landing target is the Liftboat Myrtle, a drilling platform parked above one of the planet’s most infamous scars. The Cretaceous ended here. And these researchers aim to answer longstanding questions about exactly what happened when the city-sized asteroid hit and how life recovered from the aftermath.

Decades in the Works

Jacked high above the water with her three legs grounded on the seafloor, Myrtle provides a stable platform for a motley crew of scientists drilling nearly a mile into Earth’s crust. Foam plugs are stuffed deep into my ear canals to dampen the drill’s ceaseless rumbling as operations manager David Smith explains how their diamond-tipped bit was sunk into the central peak ring of the Chicxulub crater – dinosaur ground zero. It’s an expedition that chief scientists Joanna Morgan of Imperial College London and Sean Gulick of the University of Texas at Austin have pursued for decades. I’ve arrived a day after the first science samples from Chicxulub came onboard; many crewmembers have been working for more than 17 hours straight. Mechanical problems and weather delays put the effort behind schedule, but that initial stress has now given way to the joy of discovery. As drill workers haul the 10-foot sections onto the platform, scientists race to record temperature data, acidity levels, microbiological activity and any info that could be lost before the cores are shipped to a more sophisticated laboratory in Germany.

Timothy Bralower of Pennsylvania State University searches for nannoplankton fossils in a tiny sample. The species he sees tells the team how far back in time they’ve drilled. (Credit: Eric Betz/Discover) And there are strict protocols for handling the cores. To prevent trace minerals from contaminating the samples, scientists can’t wear jewelry. DNA is another contamination concern, as researchers look to recover anything living deep below. These procedures required the crew to work in shifts through the day’s wet heat and the blackness of night. Each precious layer in the cylinder of rock preserves a point in time. Most are wafer thin. Others reveal more dramatic events. Gulick points out occasional thick, gray sections of ash from volcanoes that likely erupted in Mexico more than 50 million years ago. And while these events must have been devastating for anything living in the area, such temporary cataclysms can’t explain why 75 percent of life on Earth vanished at the end of the Cretaceous.

Myrtle’s legs help put the asteroid aftermath into context. The sea is shallow here at the Chicxulub impact site – not much more than 100 feet deep in many places. And that’s about the same depth it had 66 million years ago. If the asteroid hit somewhere else, Earth’s history might have been quite different. Like Utah’s Great Salt Lake, bodies of water often become landlocked and evaporate over long periods of time, Gulick explains. The same thing happened here during the dinosaur’s reign. As the water disappeared, it left behind large quantities of salt, locking evaporates into the limestone rock shelf. Most of Earth’s surface is covered by open ocean, so it was bad luck for the dinosaurs – and good luck for the mammals that thrived in their absence – that the 9-mile wide asteroid hit the surface here. Land turned to liquid beneath the platform where I now stand. Twelfth magnitude earthquakes shook so hard that landslides flattened regional topography. Fault lines reached the boundary between Earth’s crust and mantle. The debris rocketed high overhead, climbing through Earth’s atmosphere before succumbing to gravity’s grip and hailing fire back down across the planet.

When the Chicxulub asteroid hit, it's estimated that it delivered over a billion times the energy of the nuclear weapons dropped on Hiroshima and Nagasaki, and displaced roughly 48,000 cubic miles of sediment. (Credit: David Kring/Lunar and Planetary Institute) That sounds deadly enough, but beyond these immediate effects, it was actually the limestone that doomed the planet. When vaporized, these rocks released a toxic sulfur gas that enveloped Earth. It blocked out the sun for years. The dinosaurs were cooked and then frozen.

As I take refuge from the more than 100 degrees Fahrenheit heat in a shipping-container-turned-makeshift-laboratory, two leading experts in the world’s tiniest fossils – Penn State’s Timothy Bralower and Chris Lowery from the University of Texas – are looking through microscopes at their latest samples. By identifying individual species that evolved in the aftermath, the pair can determine how far back in time the team has drilled. This rough dating method is the vital first step after each core is hauled onto the platform.

The drill crew works around the clock, often in more than 100 degrees Fahrenheit heat, bringing up 10-foot (3 meter) sections of core. (Credit: Eric Betz/Discover) Through the eyepieces, I see what looks like fuzzy grains of quinoa scattered across a black dinner plate. They’re nannoplankton, and the tiny creatures once propped up a worldwide oceanic food chain that included monsters like plesiosaurs and mosasaurs. Something like 93 percent of these plankton were killed in the aftermath, the experts tell me. I ask if there’s any evidence the plankton were already dying off before that. “Don’t let anyone tell you (the extinction) was gradual,” says Bralower, referencing a recent study I wrote about that claims dinosaurs were in decline when the asteroid hit. “We probably had 150 (nannoplankton) species and lost 140 in the mass extinction.” “These are the kinds of things that expanded into the things that live today,” Lowery adds. “It restacked the deck,” says Bralower, jumping back in. And the plankton never recovered to their former diversity. One of the drill team’s primary goals is to study this recovery. Perhaps the first organisms to return to ground zero were extremophiles that could feed off chemicals in the bubbling heat. If so, these species could teach us about life on early Earth — and even Mars — more than 4 billion years ago, when asteroids constantly bombarded the planet. For now, we’ll just have to wait and see what they’ve dug up.