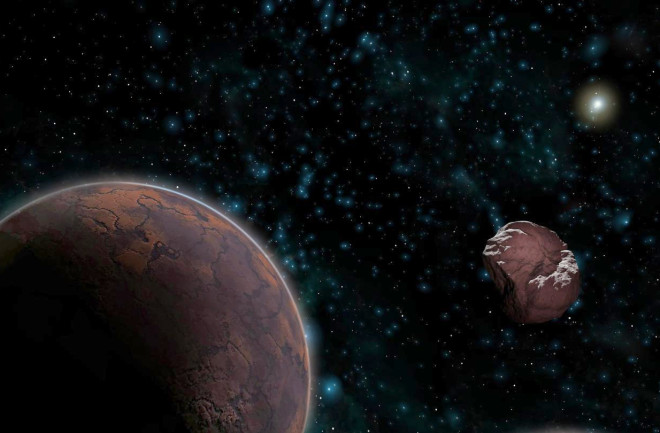 The strange, clustered orbits of trans-Neptunian objects (shown on the right) suggest that a giant planet could be out past Neptune. One new study shows how a giant disk of small rocks could better explain the strange orbits of these TNOs. (Credit: José Antonio Peñas (SINC)).

For years, some astronomers have suspected that a planet lies beyond Neptune’s orbit in the far reaches of our solar system — a mysterious, giant planet dubbed “Planet Nine.” That theory is based on the strange orbital motions of small, distant worlds that behave like some unseen object is influencing their movements. But now a group of researchers has come up with another way to explain these orbital oddities. In research published in the Astronomical Journal, the team suggests that, instead of one large object, our solar system has an enormous disk of small, icy space rocks influencing orbits. Except, like Planet Nine, this disk also hasn’t been detected before.

Past Neptune’s orbit, in a region called the Kuiper Belt, there are thousands of tiny worlds known as trans-Neptunian Objects (TNOs). They’re planetesimals that never became planets — leftovers from the earliest days of our solar system. And while this region might have once been flush with space rocks, astronomers think the vast majority of those objects were ejected in the early days of our solars system by the mass of the outermost planets.

And, for those space rocks that remain, scientists know that the solar system’s largest planets still have an orbital influence. But recently, dozens of large TNOs have been observed in strangely clustered orbits. This has led researchers to suggest that the great gravitational force of a ninth planet weighing in at 10 times the mass of Earth could be affecting the orbits of these small, far-out objects.

But now a group of researchers from the University of Cambridge and the American University of Beirut say that, rather than one giant planet, these gravitational forces could the work of a disk  of small objects that have a combined mass 10 times that of Earth.

The idea of a disk that could eliminate the explanation of a giant, Planet Nine isn’t a brand-new concept. However, this new work models the interactions between the objects in our solar system and this hypothetical, giant disk more extensively than ever before, the team says. “Our work is the first to attempt a serious confrontation between the dynamics sustained by the hypothesized massive disk and observations, and in the process reveal remarkable agreement (and some limitations),” said co-author Jihad Touma, from the American University of Beirut, in an email.

“We argue in our paper for why a massive disk in these remote parts of the solar system is not as outrageous as some theorists backed by extrapolations of observational surveys would like to claim,” he added.

“The Planet Nine hypothesis is a fascinating one, but if the hypothesized ninth planet exists, it has so far avoided detection,” co-author Antranik Sefilian of the University of Cambridge said in a statement. “We wanted to see whether there could be another, less dramatic and perhaps more natural, cause for the unusual orbits we see in some TNOs. We thought, rather than allowing for a ninth planet, and then worry about its formation and unusual orbit, why not simply account for the gravity of small objects constituting a disk beyond the orbit of Neptune and see what it does for us?”

To come to their conclusion, researchers modeled TNOs with both the gravitational influence of our solar system’s largest planets and a large disk past Neptune. The team found that, in this configuration, the gravity of the known planets combined with the large disk was enough to explain the strange clustered orbits of the 30 TNOs. With this model, the team was also able to determine the roundness of the disk, the ranges in the disc’s mass, and shifts in its orientation.

Now, while this research team suggests that this massive disk could explain the clustered orbits of the 30 TNOs, they acknowledge that, since neither Planet Nine or this disk have been directly observed, the case is not yet closed. “It’s also possible that both things could be true – there could be a massive disk and a ninth planet,” Sefilian said. “With the discovery of each new TNO, we gather more evidence that might help explain their behavior."