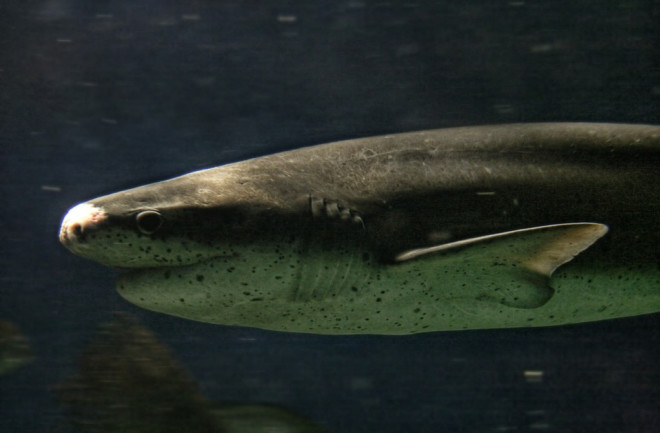 Sevengill Shark "Notorynchus cepedianus" by José María Pérez Nuñez CC BY-SA 2.0 via Wikimedia Commons Diver-citizen scientists help find out why there has been a recent increase in the number of Sevengill Sharks spotted in the San Diego area The first thing the divers noticed upon reaching the bottom was that there were absolutely no fish—anywhere. The lighting, also being strange, lent everything a deserted, eerie feel. But, says diver Mike Bear, “We continued deeper into this spooky, yellowish-green ‘ghost forest’ with its odd, dearth of fish—failing to make the obvious connection in our minds: where had they all the fish gone and why? The previous week, this same area was overflowing with life. Sometimes the fish sense something you don’t.” Bear and diving buddy Dave Hershman had just entered the water off Point La Jolla. Swimming eastward, separated by about 12 feet of water, quite suddenly a long dark shadow materialized between them, “moving at a good clip,” says Bear. It took a couple of seconds for him to register that this was a fast-moving shark. “By the time he had pulled slightly ahead of me, I saw the characteristic long tail of the Sevengill pass before my face, and from a couple of feet recognized the species.” What exactly is the Sevengill shark? Filmmaker, diver and founder of the Sevengill citizen science counting project Barbara Lloyd says, “Well, here’s the boring response to that question—scientifically speaking it’s officially known as the Broadnose Sevengill shark, Notorynchus cepedianus, and it’s the only existing member of the genusNotorynchus in the family Hexanchidae!” This fairly large shark grows to about 11 feet, is speckled with gray or brownish spots, and has only seven gills on each side, which distinguishes it from the Bluntnose Sixgill shark. The Sevengill lives in tropical to temperate waters excepting for the North Atlantic Ocean and Mediterranean Sea. With this post coinciding with Discovery Channel’s Shark Week, the more important question might be—have there been any attacks, since such a large predator inhabits these shallow near-shore waters? “Only three suspected attacks have been documented in the last fifty years,” says Lloyd, “with the most recent being in New Zealand in 2009.” They do get aggressive when feeding, mating, are provoked, and interestingly enough in aquariums. “Prior to that the Shark Attack File shows that there have only been five since the 17th Century.” Lloyd and Bear began the Sevengill Shark ID Project in 2010, after hearing numerous reports of local divers encountering them, reports that had not previously surfaced. “I had been diving regularly in the San Diego area since 2000, averaging about 100 dives per year,” says Bear, “mainly in the area of La Jolla Shores, La Jolla Cove, Wreck Alley and Point Loma, as well as being actively involved in the San Diego diving community. I do not recall hearing any diver reports of encounters with Sevengill sharks much before 2007—and then suddenly we began hearing the first reports from local divers,” he notes. The project website began as a simple spreadsheet which allowed local divers to log their encounters without photos. From there it developed into the site you see today, which uses photographs and a pattern recognition algorithm to ID individual sharks. The motivation was to answer the scientific question: why was there an apparent increase in encounters between divers and this species from 2007 onward? Dr. John Hyde a marine biologist with the National Oceanic and Atmospheric Administration in San Diego wonders if the answer to that question might just be that it is a combination of more Sevengill sharks congregating in the area, and more divers in the water. “Overall we don’t have a good sense for changes in abundance of Sevengill sharks, but it is likely that they are increasing in number since the 1994 moratorium on nearshore (within three miles) gillnet fisheries in California.” The nearshore gillnet fishery had a significant effect on abundance of many fish species, especially sharks and rays, both as direct mortalities and indirectly by removal of prey items. Hyde adds, “This coupled with increasing numbers of recreational divers, cheaper and better underwater camera systems, and increased awareness of these sharks through social media has led to better documentation of their presence.” Though sevengills are fairly common these days, especially in bay and nearshore regions, there is still a lot of research to be done. “We want to know why sevengills have been attracted to the La Jolla area over the past five years,” says Bear. “Is it the ocean conditions, changing water temperature, has the location just developed into the ideal nursery or pupping ground, or is it particularly mating-related? There may be an increase in prey, or it could be a combination of a number of these?” The project has amassed a sizable database of still photographs and video, but they are still in the early stages of data collection and evaluation, and have not published any results yet. Barbara Lloyd has had some success using the pattern recognition algorithm to identify individual sharks. For all, the most sublime Shark Week sensation would also be the most benign—to be able to dive with these magnificent predators, to be in their presence as they glide majestically by. Are you a diver who lives in the San Diego area? Help the Sevengill Shark ID project answer their questions! Visit the project page on SciStarter to sign up and learn how to enter your sightings according to the specified protocols.

It's Shark Week! And that means we're lining up shark themed citizen science projects that you can participate in. Sign up for our newsletter to know which projects are being featured and watch this space for more blog posts!