Distant Turbulence in the Magnetic Field Triggers the Northern Lights 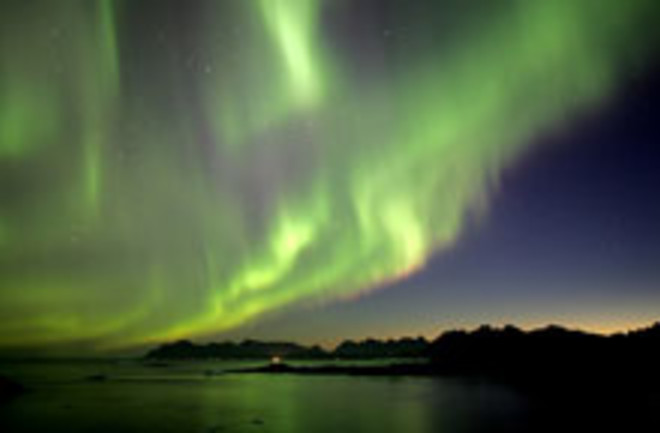 The exact mechanism that triggers the colorful auroras that dance across the night sky near the Earth's two poles has been revealed by a quintet of NASA satellites. Scientists already knew that disturbances in the Earth's magnetic field, called "substorms," bring charged particles into the Earth's upper atmosphere, where they collide with gas particles. Those gas particles then release energy as light, which flickers across the sky in waves of greens, reds, and blues. Now, researchers with NASA's THEMIS mission say they've discovered what sets off those magnetic disturbances.

The substorms begin far out in space, roughly a third of the way to the Moon, where magnetic fields from the Earth are thrown together and reconnect to sling charged particles back toward the planet, they say [New Scientist].

The particles that cause the aurora borealis stream from the sun in a constant flow known as the solar wind. The Earth's magnetic field largely deflects the solar wind around the planet, and only a small percentage of particles get through. “Think of a river flowing around a rock,” says [study co-author] Jonathan Rae.... The protected space dominated by the Earth's magnetic field is called the magnetosphere and it has a long tail, or wake, that streams away from the sun [Globe and Mail].

By lining up the five THEMIS satellites on the night side of the Earth last February, researchers were able to watch the turbulence that occurs within that long tail. In the study, which appears in the journal Science [subscription required], they say that

energy is released explosively when the Earth’s magnetic field lines above and below the magnetic equator reconnect within the magnetotail [Science News].

That explosive force is the genesis of a substorm, which sends the charged particles racing down towards Earth in less than two minutes, researchers say.