[Over the next week or two, I'll be posting some of the many, many cool astronomical images I've been collecting and which are cluttering my computer's desktop. These are all really cool pictures, and I'm glad I'm finally getting around to writing about them!] 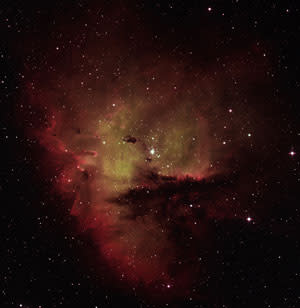 One of my favorite types of objects are things that look like other things. So how can I resist writing about the Pac-Man Nebula, aka NGC 281? As for why it's called that, duh. The image inset here (click to powerpelletenate) was taken using a telescope that sees optical light, the kind our eyes see. The resemblance is obvious, isn't it? If you're my age or younger, than Pac-Man is pretty much all you can see there (and it's not the only cosmic object to look like that, either). Of course, as an astronomer, I also see hydrogen (red), oxygen (yellowish-green), dust (black; it absorbs optical light), and evidence of star formation. Those finger-like things on the left are formed when young stars blast out fierce amounts of ultraviolet light, and eat away at the gas surrounding them. Think of them like sandbars eroding under a current. Still, all-in-all: this is clearly Pac-Man, albeit one over 9000 light years away. But what happens when you look with telescopes that see other kinds of light? Like, say, infrared and X-ray? Then things look really different. Opposite, even! What do I mean by that? Well, let me show you:

See! On the left is a combination of infrared and X-ray observations taken with Spitzer and Chandra, and I scaled the images to show the same field of view. Stuff that's dark in the optical picture on the right glows brightly in infrared on the left -- mostly warm dust. And the pink glow is due to X-rays from the very young, massive, and hot stars in the center of the Pac-Man's mouth (ghosts?). Looking at nebulae like this at different wavelengths tells us different stories about them. We learn more about how stars form, and what happens to the nebula itself as they do. Eventually, the stars in the center will explode, becoming supernovae, and will tear the nebula apart. And you know what happens to the nebula then, right? Right?Game Over.Image Credits: X-ray: NASA/CXC/CfA/S.Wolk; IR: NASA/JPL/CfA/S.Wolk; Optical: NSF/AURA/WIYN/Univ. of Alaska/T.A.Rector

Related Posts: - A dragon fight in the heart of Orion - Wocka wocka wocka Mimas wocka wocka - Swimming up the Milky Way - The Cosmic Hand of Destruction