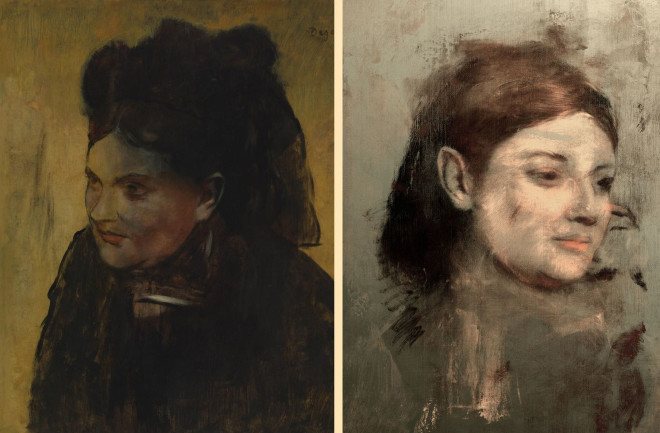 The final painting (left) and the hidden woman (right). (Credit: Australian Synchrotron) With the help of a particle accelerator, a 19th-century painting is finally giving up its secrets. Famed French impressionist Edgar Degas painted "Portrait of a Woman" sometime in the late 1870s, but since 1922, degraded oils on the canvas have revealed tantalizing hints of another woman concealed beneath the visible image. The outlines are too faint to make out clearly with the naked eye, however.

Using a synchrotron, a type of particle accelerator similar to the Large Hadron Collider, researchers in Australia peered beneath the thin surface layer of the painting and brought the hidden image to the fore. They accomplished this by running a tiny beam of photons at high energies over the entire painting one small piece at a time, a technique called X-ray fluorescence. The high-energy radiation jostled loose electrons from the atoms, causing them to emit photons at a specific energy. By measuring the photons' wavelength, they slowly built up a series of images, one for each element contained within the pigments. Layering these images on top of one another revealed the contours of a face, rotated 180 degrees from the original. They reconstructed the colors Degas used by matching different elements to the hues they produce. The entire process took around 33 hours and produced a 31.6 megapixel rendering of the hidden painting. They published their results Thursday in the journal Scientific Reports.

"Portrait of a Woman" as it undergoes scanning with the synchrotron. (Credit: Thurrowgood et. al/ National Gallery of Victoria, Melbourne)

Can You See Me Now?

The result is a pixie-eared woman, surrounded by a swirl of half-formed brushstrokes. Her face, as rendered by the researchers, is dreamier and in a distinctly lighter palette than the pensive woman in the final version. The hidden woman is most likely Emma Dobigny, a favorite model of Degas and other painters of that time. The finished portrait was painted roughly seven years after his first attempt, hinting that Degas kept Dobigny around for a reason. Reusing old canvases was somewhat commonplace—there are rumored to be hidden paintings in roughly a third of Van Gogh's works—but artists usually applied a base layer over the first piece to provide a blank surface on which to work. Degas seems to have foregone this step, painting directly over Dobigny's face as he worked on the final painting.