The Deep Impact impactor slammed into comet P/9 Tempel 1 right on the money last night! It was amazing. Imagine: a comet orbiting the Sun at 30 kilometers per second is hit by a probe moving at 10 km/sec, and images were taken by yet another instrument sweeping past the whole event. We humans are pretty smart. 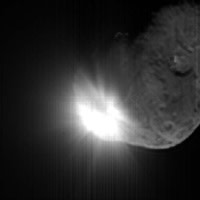 Here's an animation of images taken from the impactor as it went in. Very cool. Images are pouring in from everywhere: from the Deep Impact mission itself (run, do not walk, to see those images!), Hubble, XMM-Newton, the European Southern Observatory... it's great. I was with a group last night, and we took some images using our 14" telescope. Once I have them analyzed I'll post them, but it'll be later this week. The science is pouring in as well. Water was detected by XMM-Newton (once again showing the antiscientists are dead wrong about comets). The plume will be analyzed by for days; the images of the nucleus are fascinating, showing flattened craters, which hint at the surface composition. We'll be hearing about new ideas for weeks, and studies will go on for years. Science rocks. Congrats to the Deep Impact team!