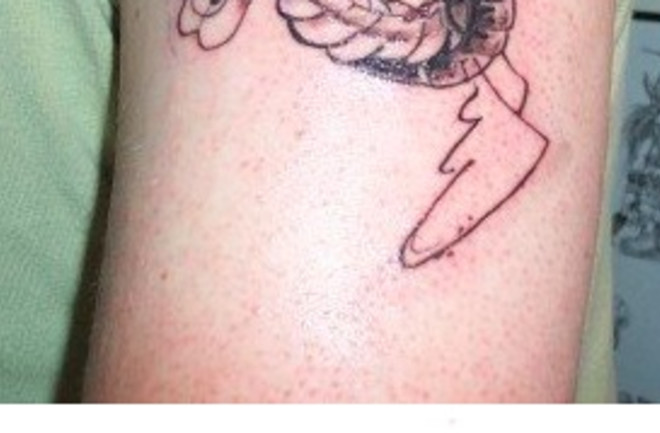 "a design of Opabinia regalis, a Burgess Shale fossil dating from the Cambrian. It has some pirate imagery, including the hourglass, skull, and nukes. As an evolutionary dead end, Opabinia reminds me of the diversity and tenacity of life through difficulty (how do you put 'Ad Astra Per Aspera' into fossil terms?), and plus it looks awesome."

Carl: Opabinia is the weirdest of the weird, a creature with five eyes and a single appendage sticking out of its head like the arm of a backhoe. It existed half a billion years ago, and its fossil remains were preserved exquisitely in the Burgess Shale formation of Canada. Because it looks unlike anything alive today, it can seem like a dead end. But it would be a mistake to separate it entirely from the animal kingdom. In fact, it shares many traits with living arthropods, a group that includes insects and crustaceans. And while the five eyes and single head arm haven't survived as far as we know, Opabinia was part of a transition from ancient forms to the arthropod body plan seen today. Its legs, for example, offer clues to how a single appendage branched in two. So while there may be no living descendants of Opabinia, they still have something to tell us about life today. Click here to go to the full Science Tattoo Emporium.