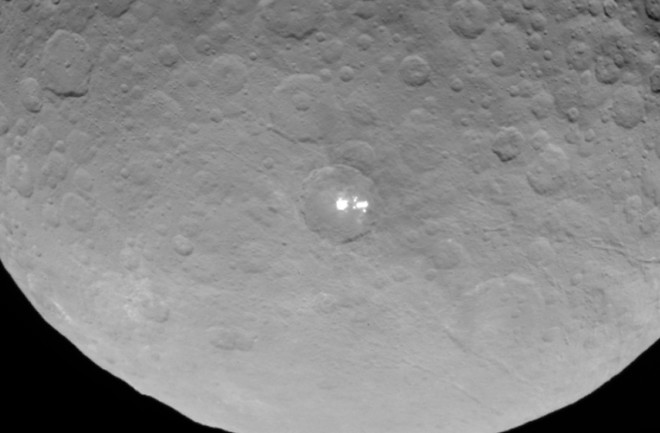 New images show that Ceres' pair of bright spots is actually composed of many smaller spots. (Credit: NASA/JPL-Caltech/UCLA/MPS/DLR/IDA) The mystery behind Ceres’ bright spots only deepened Monday with the release of new higher-resolution images of the dwarf planet’s surface. On May 3 and 4, NASA’s Dawn spacecraft crept within 8,400 miles of Ceres — its closest approach yet — to snap more detailed photos of the intriguing surface. As it turns out, the two bright spots are actually composed of many smaller splotches, but scientists still don’t know what these spots are made of or how they got there.

Time for a Close-Up

The new images from Dawn were taken at a resolution of 0.8 miles per pixel (scientists stitched the images together to make the animation below) and will give scientists new insights into Ceres’ craters and other intriguing geologic features. And thanks to Dawn’s close-up imagery, scientists can now make a few basic conclusions about those mysterious bright spots.

(Credit: NASA/JPL-Caltech/UCLA/MPS/DLR/IDA) "Dawn scientists can now conclude that the intense brightness of these spots is due to the reflection of sunlight by highly reflective material on the surface, possibly ice," said Christopher Russell, principal investigator for the Dawn mission from the University of California, Los Angeles. So we still don’t know what those spots are made of. In a poll taken by NASA’s Jet Propulsion Laboratory, 30 percent of respondents believe the spots are made of ice, while most people — 37 percent — responded with “other.” However, it’s probably safe at this point to discard the fringe theory that the spots are electronic beacons atop “massive doors that open to allow ships in and out.”

Like watching Game of Thrones, you’ll have to wait awhile for the next big development from Ceres. On May 9, Dawn fired its ion engine to begin a monthlong descent toward its second mapping orbit of Ceres. Starting on June 6, for three days Dawn will orbit Ceres just 2,700 miles from its surface — three times closer than the previous orbit. During this stage, Dawn will comprehensively map the surface to unlock the dwarf planet’s geologic history and assess whether it is active. Scientists, no doubt, will also get a much better look at those spots that set the Internet abuzz earlier this year.