Dark Energy Theory Gets a Boost From New Galactic Measurements 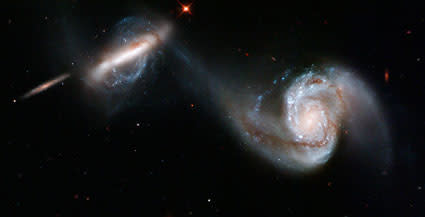 A new study of binary galaxies in deep space is inching us closer to understanding the nature of dark energy, the mysterious force pulling our universe apart at an ever-increasing rate.

To get a better handle on these "dark" forces, which we can't detect with our puny human equipment, researchers Christian Marinoni

. The theory says that if you examine a sphere of space somewhere in the universe and compare it to a sphere farther away, the distant sphere would look elongated, because of the accelerated expansion of the universe. By measuring the degree of this distortion, researchers think they can get a firm idea of just how much dark energy is out there causing the acceleration.

The test is a new look at the curious phenomenon of dark energy, and its findings agree well with a mounting body of evidence from different perspectives. "Thus far, the picture has been pretty rosy, in that all the tests that have been done seem to fit together," Strauss says. "But the more tests you have, the better off you are." [Scientific American]

, published in Nature, looked specifically at two-galaxy pairs. The researchers assumed that these galaxy pairs would be evenly spread through the universe, and would also behave similarly in near and far time (meaning the galaxies in each pair would we separated by a similar distance). The researchers compared the observed distances between paired galaxies near us to the observed distance separating older, farther pairs. By looking at the color

of the stars in the farther galaxy pairs, researchers can determine how far their light has traveled, and thus measure the universe's expansion. Then, by adapting how fast the expansion of the universe is accelerating in their models to match what they observed, the researchers came up with a number for how much dark energy is out there.

The team measured the separation of 700 nearby pairs, which they could do directly without reference to the expansion of the universe. Then, taking the observations of 500 distant pairs, they adjusted the value of the rate of expansion until the average separation appeared the same in the distant ones as in the nearby ones. The resulting dark energy value, 74 per cent of the universe's energy, had a potential error one-third the size of previous estimates. [New Scientist]

Cosmic Variance: How to Go After Dark Energy?