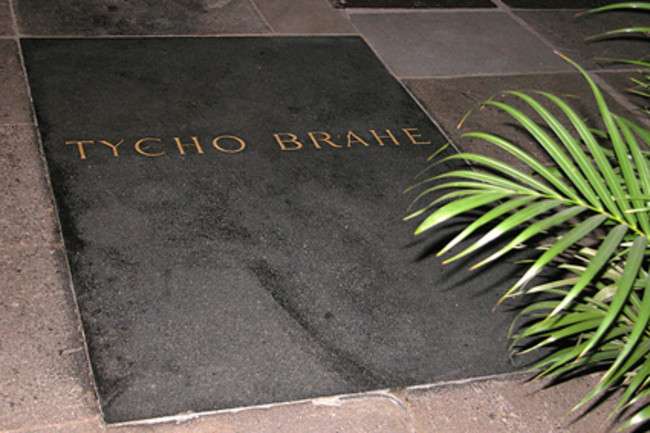 We just won't let Tycho Brahe be. A colorful character and a father of modern astronomy, Brahe died in 1601 and was buried at Tyn Church near Prague's Old Town Square. But the popular explanation for his expiration—a bladder infection—just doesn't satisfy modern scientists seeking the truth about Tycho. So this week, Danish and Czech scientists (Brahe was Danish but died in Prague) got permission to exhume the long-dead stargazer to find evidence of his true cause of death.

His body has been exhumed before, in 1901. Tests on a sample of hair from his moustache, taken at that time, have been conducted as recently as the 1990s and indicated unusually high levels of mercury. Brahe was also an alchemist and some have suggested that he would have handled mercury and may have administered it to himself as medicine. Others have suggested he was poisoned. [BBC News]

Brahe's exacting and detailed observations of the stars and planets laid the groundwork for modern astronomy (though he didn't realize the planets move in ellipses rather than circles—that would fall to his younger counterpart, Johannes Kepler

in the late 1500s earned him his own island in Denmark where he built his observatory. To cement his larger-than-life status, Brahe famously wore a false nose for much of his life after losing his natural schnoz in a duel. Even his courtiers were notorious: I learned from reading Richard Cohen's new book Chasing the Sun

that William Shakespeare took the names Rosencrantz and Guildenstern

, the untrustworthy courtiers in "Hamlet," from Tycho's assistants who visited England in the 1590s. So it's hard to accept something so mundane as a bladder infection when it comes to Tycho Brahe--although even the bladder theory is wrapped in a legend that the organ exploded because Brahe was too polite to excuse himself to the restroom at a banquet. The mercury traces have inspired more lurid ideas for Brahe's demise, like murder by Kepler or by agents of the Danish king. Jens Vellev, who leads the team exhuming the famed astronomer, hopes a detailed analysis can provide more clues to Brahe's end.

The scientist said the tests will include a CT-scan and an X-ray technique known as PIXE analysis and be conducted at the Nuclear Research Institute AS in Rez near Prague. Vellev said he hopes they will help establish Brahe's intake of mercury in the last weeks of his life when he apparently was taking medicine that contained mercury to relieve pain. [AP]

It will probably take until next year for Vellev's team to fully analyze the new samples they take. But besides tracking Tycho's mercury regimen, their study could uncover a bonus find: the secrets of the false nose's composition. Brahe's metal replacement wasn't there during the 1901 exhumation, but Vellev says that his tests could perhaps reveal residue that points to the prosthesis's metal makeup. Related Content: 80beatss: Detoured Light From Tycho's Supernova Finally Makes It to Earth

, including antimony, which may have done in Mozart. DISCOVER: Searching Heaven And Earth for the Real Johannes Kepler

Discoblog: Did Arsenic Kill Napoleon? His Hair Says No.