Curiosity: We Have a Problem

A NASA engineer discovers a last-minute error with just days to spare. 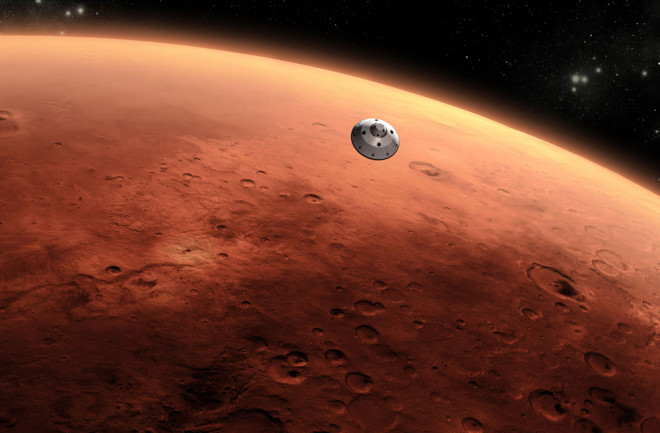 Illustration of the Curiosity rover's descent on Mars. | NASA/JPL-Caltech

In 2012, the Curiosity rover pulled off a spectacular landing on Mars as the whole world watched. But it was almost not to be. Just days before the landing on a Sunday in early August, NASA Chief Engineer Miguel de San Martín discovered an error. His team placed the spacecraft’s Inertial Measurement Unit, an essential instrument for landing, in the wrong place, a few inches above where the landing software expected it.

The Curiosity rover's descent on Mars was a success, thanks in part to the engineering efforts of Miguel de San Martin. | Michael Nelson/EPA/Corbis

Maybe the mistake wouldn’t affect anything, but it could destroy the multibillion-dollar rover upon landing. With the clock ticking, San Martín and the rest of the team in Pasadena, Calif., had to help NASA figure out a solution: do nothing and risk a crash, or send a special programming command to the spacecraft and hope it doesn’t have any nasty consequences.

In His Own Words

I went to see Pete Theisinger, the project manager, and I explained the error, taking full responsibility. We took it to the board of experts that deals with these things, and they voted for “no change.” I felt relieved that it was over.

But that night, I started thinking. Did we consider all the aspects of this thing? I got cold feet. In this business, you need to be paranoid to be successful. You have to assume that an error could be the tip of an iceberg of a bigger problem. I didn’t sleep.

So, it’s Friday. I go back to Pete, and we agree to have another meeting Saturday morning to make the final decision. We worked that whole night, filling whiteboard after whiteboard with equations. I thought I’d actually be enjoying getting closer to the landing, but I just wanted to make a big hole and bury myself.

It’s 10 a.m. Saturday, just one day before landing. The small room is full of upper management, and we hear that NASA headquarters in Washington was told about this issue. Most people were voting “no change,” but when Pete’s turn came, he said, “I want the change,” overruling everybody. Our equations convinced him. There was grumbling, with some of the other members openly disagreeing and trying to change Pete’s position, but they couldn’t.

We had another meeting, this time with people from headquarters. I’m feeling very small, walking with my tail between my legs. So Pete tells the story, but now everybody votes unanimously in favor of sending the software fix.

Pete looked at me and said, “Miguel, excellent job.” I was shaking at that point because I felt that I let him down. Pete told me that “it was excellent because, first of all, you found it and got to the bottom of it; secondly, you came and told me about it.” I felt relieved and was proud of being part of a culture that promotes openness. We sent the programming fix to Curiosity that night. The next day, landing went fantastically well.