Just a quick update: new analysis of the incredible picture from the HiRISE camera on the Mars Reconnaissance Orbiter showing Curiosity parachuting to the surface of Mars has revealed a new detail: the rover's heat shield: 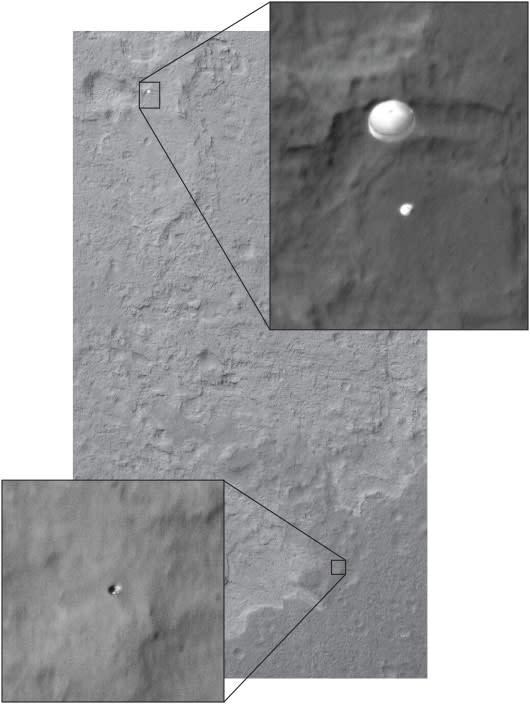 Very cool! But it gets better: given when this shot was taken, and the lack of disturbed dust under the shield, it's thought that this shows the heat shield still falling to the surface! It's an action shot! The heat shield was the blunt end of the spacecraft that protected the rover from the heat of atmospheric entry, and was ejected about a minute and a half before landing. It would've hit the surface seconds after this shot was taken. As I write this (23:30 UTC) I'm watching the press conference, and they're showing video of the descent as seen by the rover itself, and it's amazing! I'm sure this will be available soon, and when it is I'll post it. [UPDATE (August 7, 00:15 UTC): The video has been released, and here's my post about it!] Image credit: NASA/JPL/University of Arizona

The SciencesAncient Mars May Have Had Rings, Then Moons, Then Rings ...
Recommendations From Our Store