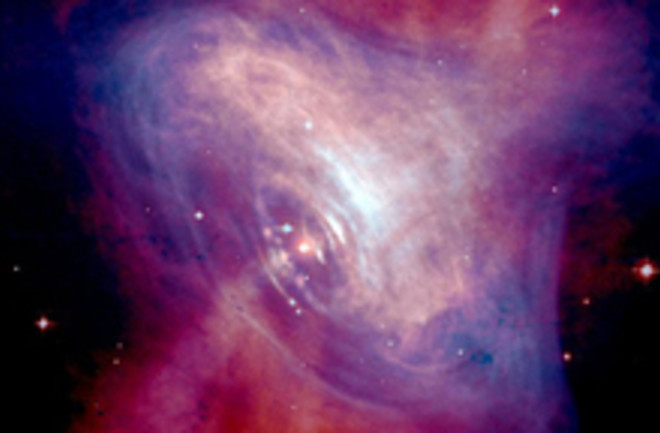 August has been quite the success story for the use of crowdsourcing—farming out work to willing humans or bored computers—to make scientific discoveries. Last week a study showed how citizen scientists helped unravel the structure of proteins by playing a video game. Today, a study in Science documents a newly discovered pulsar—newly discovered by the computers of amateurs, that is. This find was the first of its kind for Einstein@Home, a project that uses the downtime of a network of volunteer computers to hunt for gravity waves and radio signals. (The more famous SETI@Home uses computer free time to seek out alien signals.) The idling PC of Chris and Helen Colvin of Ames, Iowa, detected the signature of the pulsar now called J2007 for short, which was confirmed by a computer in Germany owned by Daniel Gebhardt. Pulsars are interesting objects: These rotating stars emit a beam of radiation that is only visible to us when the beam flashes past Earth, a phenomenon called the lighthouse effect. And the newfound pulsar seems particularly interesting.

It turns out that J2007, located in the Milky Way in the constellation Vulpecula, is not just any radio pulsar. Most pulsars are neutron stars that spin on their axis about once a second and have strong magnetic fields. In contrast, the J2007 neutron star spins 41 times a second, and has a weak magnetic field. This type of fast-spinning pulsar is usually associated with a binary-star system -- but J2007 seems to be sitting out in space by itself [MSNBC].

: ripples in space caused by massive objects, theorized in the early 20th century by Einstein. But after finding no significant signals

, Allen turned part of the program over to seeking radio signals from pulsars, hoping to give the volunteers something to get excited about. When the pulsar was spotted, Allen says, it took a while to get the excitement across to the Colvins. He tells MSNBC

that they thought his emails were spam, so he had to send a certified letter to get their attention. Once he did, though, the Iowa couple was walking on air.

Helen Colvin says that she and Chris loaded Einstein@Home after a period of running SETI@Home because it seemed more likely to get a result some day. Still, she is surprised to own the computer that actually found something. "It was a bit like winning the lottery," she says. "The odds aren't in your favour" [Nature].

DISCOVER: The 14 Best Ways To Use Your Computer’s Spare Time

80beats: NASA Invites You To “Be a Martian” And Explore the Red Planet’s Terrain

80beats: Crowdsourced Science: 5 Ways You Can Help the Hive-Mind