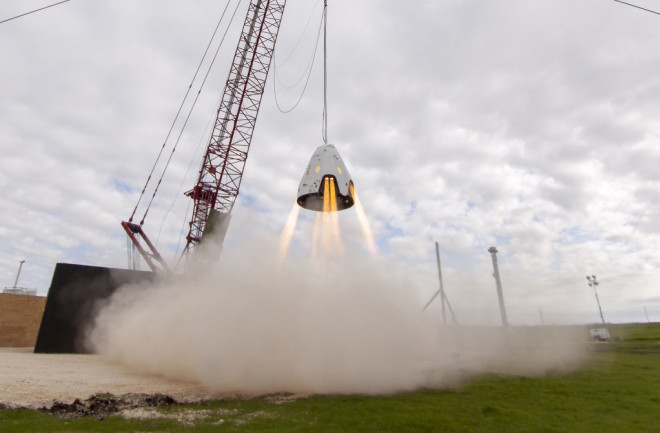 The SuperDraco thrusters that can propel the Crew Dragon capsule were being tested on Saturday, April 20, when SpaceX says the craft suffered an "anomaly." The thrusters are shown here firing during a previous test. (Credit: SpaceX) SpaceX's Crew Dragon capsule experienced an “anomaly” during a rocket test on Saturday that sent smoke drifting high over its launchpad at the Kennedy Space Center in Florida. Elon Musk and SpaceX have been short on details so far, but unconfirmed video footage shows the spacecraft being destroyed. The same Crew Dragon capsule completed a flawless flight to the International Space Station in March. The event raises concerns that SpaceX may not be able to fly humans to space for the first time this year, let alone hit their target launch date in July.

The mishap took place as SpaceX was performing a static fire of their SuperDraco engines. That means the spacecraft was tethered and not meant to leave the launchpad. SuperDracos are directly attached to the crew capsule, and the large Falcon rockets that would actually launch the spacecraft into orbit were not in use. The SuperDracos’ job is to carry the crew capsule safely away from the larger rockets if something goes wrong with the main thrusters during or shortly after launch, allowing Crew Dragon to land safely. In the video, which has not been verified, the explosion occurs before the SuperDracos actually fire, so the cause of the anomaly isn’t clear. An image captured by Florida Today shows smoke billowing above the launchpad as seen from a distant beach. "The NASA and SpaceX teams are assessing the anomaly that occurred today during a part of the Dragon Super Draco Static Fire Test at SpaceX Landing Zone 1 in Florida," NASA Administrator Jim Bridenstine said on Saturday. "This is why we test. We will learn, make the necessary adjustments and safely move forward with our Commercial Crew Program." Saturday’s test was separate from a scheduled upcoming in-flight abort test that would actually launch the spacecraft using a Falcon booster. In the test, the SuperDracos have to fire and separate Crew Dragon from the Falcon rocket before reaching space. That test was scheduled for June, but it’s unclear whether SpaceX will still make that deadline. Any setback would be a blow for SpaceX, which had planned to fly humans into orbit this year and earn its official longterm certification from NASA to ferry humans to the International Space Station. However, since that certification hasn’t happened yet, NASA recently announced that their upcoming ISS crew rotations won’t be dependent on either of the Commercial Crew partners. NASA has paid billions to both Boeing and SpaceX to replace the astronaut ferrying services the space agency has lacked since the space shuttle retired in 2011. Boeing, like SpaceX, has had schedule slips. At this point, neither company seems likely to get certified in 2019. So instead, NASA will have to continue their reliance on Russian Soyuz rocket flights. At a telephone press conference this morning discussing SpaceX’s upcoming cargo resupply mission to the ISS, NASA said that the April 30 Crew Dragon launch date remains unchanged. SpaceX’s cargo and Crew Dragon capsules are separate spacecraft and Dragon 1, the cargo version, has already flown 16 successful supply missions to the ISS. [embed]https://twitter.com/jeff_foust/status/1120342336272248832[/embed]