The astronauts' exit from the capsule was slightly delayed by noxious gas, but they ultimately made it back to Earth unscathed. 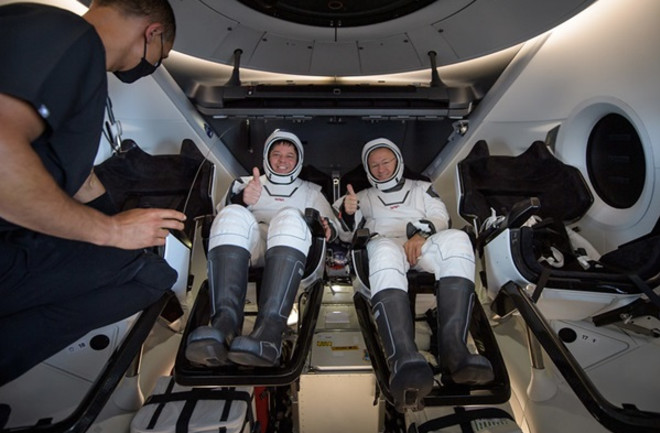 Shortly after 2:48 P.M. ET on Sunday, August 2, NASA astronauts Bob Behnken and Doug Hurley safely splashed down in the Gulf of Mexico after spending the past two months aboard the International Space Station (ISS). The event was not only the first water landing since 1975, it also marked the first time any astronauts have safely splashed down in a crew capsule built by a private spaceflight company — namely, SpaceX.

“It’s a testament to what we can accomplish when we work together to do something once thought impossible,” NASA Administrator Jim Bridenstine said in a NASA press release. “Partners are key to how we go farther than ever before and take the next steps on daring missions to the moon and Mars.”

What Is it Like to Come Back to Earth?

The Crew Dragon left the International Space Station (ISS) at around 7:30 P.M. ET on Saturday, August 2. After locking the hatches and departing the ISS, the capsule performed a series of engine burns throughout the night to ensure it was on the right path home. During that time, Behnken and Hurley also got their required eight hours of sleep before receiving wake-up calls from their children before reentry.

In some ways, the return trip can be even more dangerous than the initial liftoff.

Initially zipping around Earth at some 17,000 miles (27,350 kilometers) per hour, Crew Dragon first pierced through Earth’s upper atmosphere. As friction slowed the craft, the temperature outside the capsule swelled to about 3,500 degrees Fahrenheit (1,900 Celsius). But inside, thanks to heat shields on the exterior of the spacecraft, the temperature remained below 85 F (29.5 C) — warm, but all things considered, quite comfortable.

While the heat shields protected the blistering spacecraft, a bubble of ionized gas surrounding Crew Dragon caused an expected and temporary six-minute communications blackout. During this time, Behnken and Hurley experienced forces up to five times the strength of Earth’s gravity. These forces were much more intense than those astronauts experienced during Space Shuttle missions, but they also didn’t last as long.

When the spacecraft reached about 400 mph (645 km/h), Crew Dragon deployed two drogue parachutes to further slow and stabilize the craft before setting loose its four main parachutes. These reduced the speed of the capsule to around 16 mph (26 km/h). About two minutes later, Behnken and Hurley successfully splashed down in the Gulf of Mexico.

Despite concern for high winds and waves to disrupt Crew Dragon’s return, the weather was near perfect during the splashdown landing. (Credit: NASA/Bill Ingalls)

Recovery “fast boats” swept in immediately after splashdown, and many lookie-loos in pleasure boats converged around the site shortly after. While some of the recovery crew ensured there were no toxic fumes lingering around the spacecraft, others worked to drag the parachutes out of the ocean.

Next, the recovery ship Go Navigator closed in on the capsule. A large rig on the ship plucked Crew Dragon from the water, gently placing it onboard in a dock nicknamed the “Dragon’s nest.”

Earlier this year, during the Demo-2 mission, SpaceX Crew Dragon Endeavor spacecraft was pulled from the Gulf of Mexico by SpaceX’s GO Navigator recovery ship. It was then nestled into the “Dragon nest”. (Credit: NASA/Bill Ingalls)

Behnken and Hurley still had quite a long wait left, however. Their exit from the capsule was delayed due to the detection of low levels of potentially toxic propellant they would have had to pass through upon departure. In an abundance of caution, recovery crews vented the fumes, and soon enough, Behnken and Hurley were helped out of the capsule. Following standard procedure, the astronauts were taken out of Crew Dragon on stretchers, but they both gave cameras the thumbs up as they were handed off to NASA’s medical team. After a quick check-up, Behnken and Hurley were taken to meet with their families.

Overall, Dragon was a successful flight. But over the next few weeks, scientists and engineers will check and double-check the mission and reentry data, looking for any potential issues that still need addressed. NASA says the launch date for the first regular, fully operational Crew Dragon flight — rather than a demo mission — will be no earlier than late-September of this year.

You can watch the entire event below, courtesy of SpaceX. (Skip to 6:24:08 to watch the parachute deployment, splashdown, and recovery.