If it weren't so freaking irritating, I'd laugh over the video called "Our Created Solar System" presented at a website called Creation Astronomy. As you might expect, it's purporting to have evidence that the Universe isn't 13.7 billion years old, but is instead some integrally-multiple number of begats old.

I watched the Jupiter video until all I could hear was a loud buzzing sound punctuated by the word "evolution". Last I recall, evolution was the change in allele frequency over time... Jupiter has chromosomes? Are creationists that confused? Well, certainly many are, but why ascribe to ignorance what can be ascribed to misdirection? The creator of the video obviously uses the word evolution over and over again because it's a buzzword likely to sway people predisposed against science to agree with the bizarre version of reality he espouses, even though he must know that evolution has nothing to do with astronomy. Hmmm. Bear false witness much? The nonsense pouring forth from those videos would carve the Grand Canyon in just days^*. It would be interesting to debunk the garbage presented point by point-- in the sense that it would be interesting to slowly push a red-hot knitting needle into my ear -- but there's no need. Debunking that video is like trying to cure chicken pox one scab at a time. It's all "god of the gaps" nonsense, "science can't explain this or that", with them always and forever forgetting the one word that changes everything: "Yet". 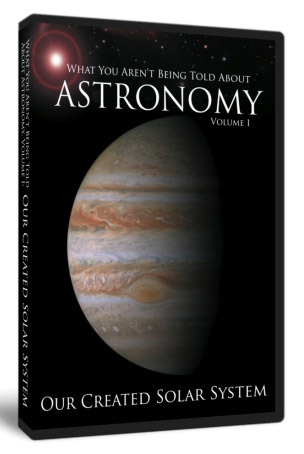