We're not very good at defining what "consciousness" is, although we think we know it when we see it. One promising avenue of attack on the problem is to consider how consciousness may have developed over the course of the evolution of life. There's a great blog post about this by Malcolm MacIver over on our sibling blog Science Not Fiction. He is thinking about an obviously-important event in the history of life -- the moment when aquatic organisms first flapped up onto land and starting breathing air, if we may greatly simplify a complicated process -- and asking about its consequences for consciousness. The idea is one of those deceptively simple ones that makes you wonder why you didn't think of it all along. The point is: attenuation lengths. In water, you just can't see very far; your vision becomes blurry after a matter of meters. Consequently, you don't have much time -- maybe seconds -- to react to the world around you, whether what you see is prey, a danger, or a potential love interest. So the evolutionary pressure is to "make up your mind" extremely quickly, essentially right away. Now imagine you crawl up into the air. Suddenly, you can see for kilometers! Now a different mode of action becomes useful: thinking about hypothetical alternatives. Under water, too much Hamlet-like equivocation would have made you someone's dinner before long; now, you can ask yourself whether it would be better to duck under a rock, scurry up a tree, or finally take a stand against that big bully. 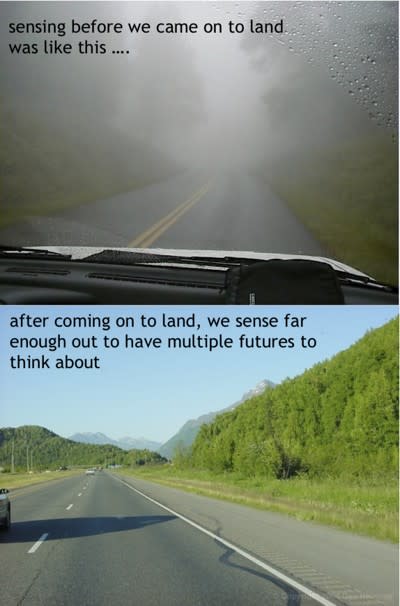 The ability to contemplate competing alternatives before making a decision is a crucial part of what we call consciousness. It's related to another idea I believe I first got from Steven Pinker's The Language Instinct, although I don't remember the precise passage: the claim that what really separates the conscious from the non-conscious is the ability to use grammar. In particular, the subjunctive mood, in which we talk about hypothetical futures. ("If I were to go and bring you back some tasty fish, would you let me live?") Lots of animals can communicate using something like "language," but the ability to make agreements based on contrary-to-fact scenarios is what separates the shouters from the negotiators. And of course, the ability to contemplate hypothetical scenarios is an important prior step to being able to communicate about them. Be sure to read the comments, where man good questions are asked ("What about octopuses?" "Aren't there senses other than vision?") and also answered. Malcolm also provocatively tries to imagine what it would mean if we vastly improved our sensory capabilities, which of course technology is doing for us all the time. What's next after consciousness?