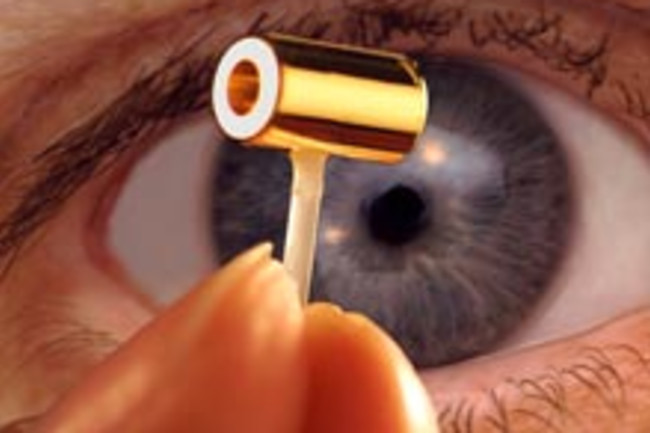 Researchers in California are preparing to fire 192 lasers at a minuscule pellet of fuel to create their first nuclear fusion reaction, the same reaction that takes place in the center of the sun. Within two to three years, the researchers at the National Ignition Facility (NIF)

expect to be creating fusion reactions that release more energy than it takes to produce them. If they're successful, it will be the first time this has been done in a controlled way--in a lab rather than a nuclear bomb, that is--and could eventually lead to fusion power plants [Technology Review].

Earlier this month, technicians test fired all 192 lasers at once, concentrating their beams on a single focal point in the middle of the chamber. For the test, the chamber was empty. But when real experiments begin within the next few months, the target will be a tiny

gold capsule the size of an extra-strength Advil. The goal is to mash the contents of the capsule, a BB-size pellet of hydrogen frozen to nearly absolute zero, until the hydrogen atoms fuse into helium and release a gush of energy [Forbes Magazine].

The $3.5 billion facility, which has been in development for 15 years, was funded primarily as a way to better understand nuclear weapons, after a ban on testing in the 1990s. NIF will produce tiny thermonuclear explosions that give scientists insight into what happens when a nuclear bomb goes off. That data can, in turn, be used to verify computer simulations that help determine whether the United States' nuclear stockpile will continue to work as the weapons age [Technology Review].

But other researchers will be studying the basics of nuclear fusion in order to better understand our sun and other stars, while still others are most interested in nuclear fusion as a revolutionary, and clean, energy source. To point the way towards nuclear fusion power plants (instead of the typical nuclear fission power plants), researchers will have to reach that elusive goal: the "burn," a self-sustaining reaction that puts out more energy than it takes in. Many have tried and failed to reach that goal before, but NIF director Edward Moses

is undaunted. He dismisses all previous attempts at fusion as lighting the edge of a pile of wet leaves. "Poof, and then it's out," he says. "We're going to burn the pile. We are on the edge of burn" [Forbes Magazine].