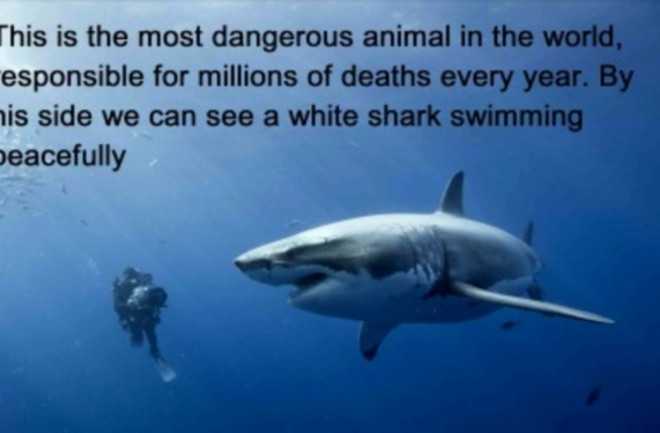 What's cooler than mockumentaries? THIS STUFF. I'm not the only one who has picked up on Brian Switek's Cooler than #SharkWeek idea. The following are some awesome sharky posts linked to from the news, blogs or twitter. I even threw in some non-shark marine biology, just because marine biology rocks

.C. megalodon WAS awesome. Darren Naish explains just how awesome, Brian Switek shows what's left after their bites, and in case that's not enough Megalodon action, here's an in-depth look at the species. Every wondered what's inside a whale shark's head? Now you know. Christian Grey's fetishes seem tame compared to the kinky sex lives of grey reef sharks. Some beautiful footage of oceanic whitetip sharks! Immortalized in stone, the world's first Turducken! Or, should I say, SharAmphFish (just doesn't have the same ring, does it?) I could link to them all in succession, but I'll be brief: go check out Ed Yong's list of shark-centric stories for cookie-cutter bites, high-speed tail slapping,cannibal fetuses, and more. Deep Sea News has a list, too; there, you can learn why they're called sharks, see a two headed one, and why you should care that they scare the crap out of seals. 100,000,000. That's the number of sharks people kill every year. How many sharks kill people? I'll give you a hint: lose about seven of those zeros. Worse: disappearing sharks are causing other species to vanish, too. Why are we obsessed with sharks? They're the perfect villains. (They even look like devils!) David Shiffman explains why we shouldn't call them "shark attacks". But, just in case, here's how to survive the shark attack that is never going to happen. This week, SeaWorld performed the first ever shark C-section. And you thought pregnant women were hard to handle when giving birth... Douglas Main tells us some weird shark facts. Did you know that one species has glowing spines? I didn't! Oh, and they make their own toothpaste.Can we design shark-deterring wetsuits? (I don't care if it works. I want the lionfish one.) "There was no place to hide in the middle of the Western Interior Sea and there was no protection to be had from others of his own kind...." If sharks aren't your thing, there are always whales. The epic battles between sperm whales and giant squid are more than legendary, they're immortalized in crap. And while we're on the topic of sperm whales, they might be gentle giants now, but their ancient relatives were much more gruesome. Oh yeah, and dolphins can remember each other for decades. Guess it's time to rethink that elephant saying... Can we train sharks to kill invasive species? Maybe... but I'm not so sure this is a good idea. Hungry sharks following divers doesn't sound like the smartest plan. Oh, and this, just because: