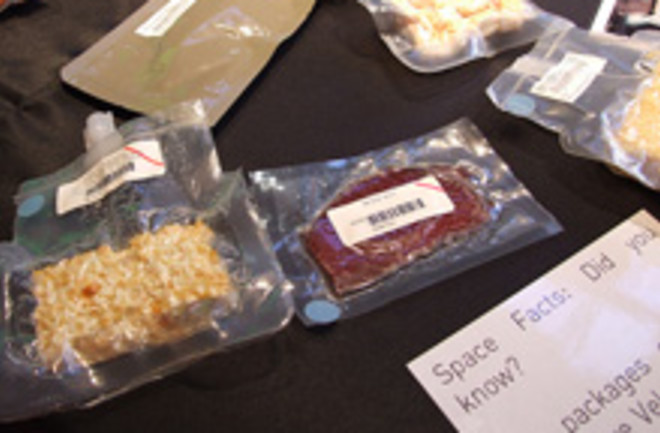 It takes Sandra Magnus more than two hours and a roll of duct tape to cook garlic and onions. Granted, she's doing it all in space, where for the last four months she has been practicing orbital cooking. It's not the easiest of tasks in a low-gravity environment, where even the tiniest crumbs can get lodged in a shuttle vent or even float into an astronaut's nose, posing a breathing hazard. One of Magnus's first space culinary efforts: pesto canned chicken with vegetables, olives, and sun-dried tomatoes. The result? "Mediocre," she said. She kept a journal of her cooking experiences, jotting down observations that are sure to come in handy for astronaut posterity. She noted that mixing was most easily done with sealed plastic bags, duct tape proved useful as a way to keep items (especially waste) in place, and when slicing, large pieces were most practical. To cook the garlic and onions, Magnus mixed them in foil packets left over from some of the dehydrated food and squirted olive oil inside. She then put the package into the food warmer, which lasts for only about 30 minutes at a time, forcing her to come and turn it back on four or five times before the garlic was cooked. With the finished garlic-onion mix, she made two sauces that she said tasted great. No mention, though, of whether the onions smell up a kitchen in space the way they do here on Earth. Related Content: DISCOVER: Reviews Just How Nasty Is Space Food? Discoblog: What Happens to Your Underwear in Space?