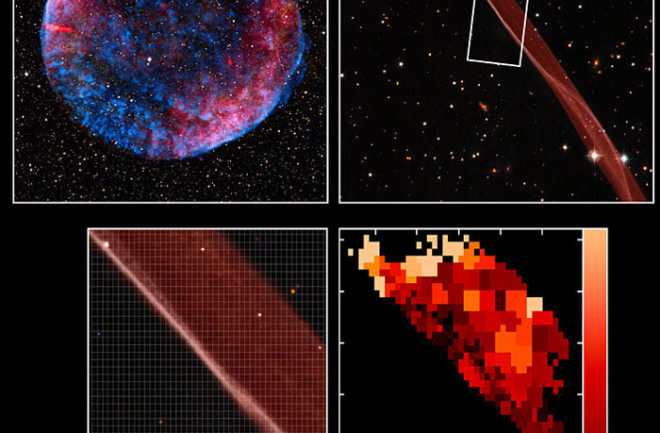 Extremely detailed observations of the remains of supernova SN 1006 (seen in full at top left, and in progressively finer detail) and other remnants suggest that cosmic rays might originate within these stellar blasts. Supernovae, the spectacular death rattles of the largest stars, are the astronomical gifts that keep giving. The stellar explosions can add a temporary new jewel to the night (and sometimes day) sky, and they leave behind spectacular and intricate formations known as remnants. A certain class of supernovae helped astronomers realize that the universe’s expansion is speeding up, leading to the “discovery” of dark energy pervading our cosmos. And now, it seems, supernovae might ultimately be to blame for one of astronomy’s longest running mysteries: the origins of cosmic rays. Scientists have known about these ridiculously energetic and high-velocity particles for nearly a hundred years. In daily life, cosmic rays may be familiar as the source of extra radiation airline passengers are exposed to. However scientists have been uncertain about where cosmic rays come from. The extreme conditions of temperature and speed that accompany supernovae and their remains made them a natural starting point for guesses. Now two separate Science papers finally provide evidence that cosmic rays do indeed come from supernovae remnants. In the first paper, a team of European astronomers used the Very Large Telescope in Chile to study the remnant of supernova SN 1006 (so named because the light of the blast reached Earth’s skies in 1006). Specifically, they looked at the shock front that results when the fast-moving detritus of the exploding star meets the inert interstellar matter surrounding it. By using the latest in telescope tech, the team could spot individual particles called “suprathermal” protons, traveling faster than temperature alone would account for. These apparently can act as the “seed particles” which, after interacting with the shock wave, can become energetic enough to zoom into space in the form of cosmic rays. The scientists behind the second paper, which will be published tomorrow, made use of the Fermi Gamma-ray Space Telescope to analyze the supernova remnants IC 443 and W44. (Understanding where cosmic rays come from is one of Fermi’s primary mission goals.) After studying years’ worth of data, the team eventually found direct evidence that the remnants are a source of cosmic rays. They knew that when a cosmic ray smashes into a normal proton, it can produce a particle called a neutral pion, which soon decays into a pair of gamma rays with distinct characteristics. Once the scientists spotted those definitive gamma rays coming from the remnants, they knew cosmic rays within were the cause. More research is still necessary to fully understand cosmic rays, but these two findings appear to be a significant step toward understanding these enigmatic emissions. Image courtesy of: ESO; Radio: NRAO/AUI/NSF/GBT/VLA/Dyer, Maddalena & Cornwell; X-ray: Chandra X-ray Observatory/NASA/CXC/Rutgers/G. Cassam-Chenaï, J. Hughes et al.; Visible light: 0.9-metre Curtis Schmidt optical telescope/NOAO/AURA/NSF/CTIO/Middlebury College/F. Winkler and Digitized Sky Survey