Confessions of a Martian Rock 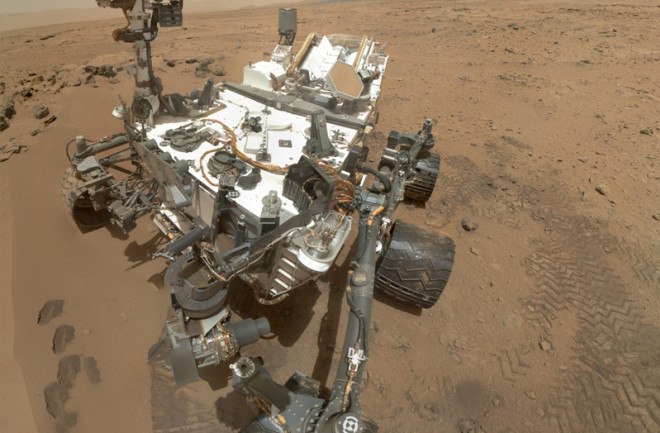 The Curiosity rover (Credit: NASA) I look at rocks on Mars for a living—a lot of rocks. Because of this, I’ve gotten pretty good at knowing what to expect and what not to expect when analyzing the chemical make-up of a Martian rock. You expect to find lots of basalt, the building block of all planets. What I didn’t expect were large amounts of manganese. So when my colleagues and I found exactly that on a Martian rock called “Caribou” back in 2013, we thought, “This has to be a mistake.”

Trace amounts of the element manganese typically exist in basalt. To get a rock with as much manganese as Caribou has, the manganese needs to be concentrated somehow. The rock has to be dissolved in liquid water that also has oxygen dissolved in it. If conditions are right, the manganese liberated from the rock can then precipitate as manganese oxide minerals. On Earth, dissolved oxygen in groundwater comes from our atmosphere. We’ve known for some time now that Mars once had vast oceans, lakes and streams. If we could peer onto Mars millions of years ago, we’d see a very wet world. Yet we didn’t think Mars ever had enough oxygen to concentrate manganese—and that’s why we thought the data from Caribou must have been an error.

The Hunt Is On

So what do you do when you find a Martian rock with a chemistry you didn’t expect? You go look for more. When NASA’s Curiosity rover arrived at the Kimberly region of Gale crater, we went to work, looking at the mineral-filled cracks in sandstones on the floor of what was once a deep lake. We used the ChemCam instrument, which sits atop Curiosity and was developed here at Los Alamos National Laboratory, to “zap” rocks on Mars and analyze their chemical make-up. (In less than four years since landing on Mars, ChemCam has analyzed roughly 1,500 rock and soil samples.)

When ChemCam fires its laser pulse, it vaporizes an area the size of a very small pinhead. The system’s telescope on the rover peers at the flash of glowing plasma created by the vaporized material and records the colors of light contained within it. This light allows us here on Earth to determine the elemental composition of the vaporized material. And what did ChemCam discover? More rocks filled with manganese oxides. So Caribou was not a mistake — far from it.

Why Does Manganese Matter?

We never expected to find manganese oxides on Martian rocks because we didn’t think Mars ever had the right environmental conditions to create them. We can look to Earth’s geological record for an explanation. More than 3 billion years ago, Earth had lots of water but no widespread deposits of manganese oxides until after photosynthesizing microbes raised the oxygen levels in our atmosphere. Although there was already plenty of other microbial life on Earth at this time, these new photosynthetic microbes used sunlight energy in a new way and created a new type of waste product in the process: oxygen.

The Curiosity rover examines the Kimberley formation in Gale crater, Mars. In front of the rover are two holes from the rover's sample-collection drill and several dark-toned features that have been cleared of dust (see inset images). These flat features are erosion-resistant fracture fills that are composed of manganese oxides, which require abundant liquid water and strongly oxidizing conditions to form. The discovery of these materials suggests that the Martian atmosphere might once have contained higher abundances of free oxygen than in the present day. (Credit: MSSS/JPL/NASA) By adding oxygen to the atmosphere, these tiny microbes transformed Earth’s environment. Suddenly, minerals never before formed on Earth started being deposited, including manganese oxides. This monumental environmental shift is recorded in the chemistry of rocks of that age all over the world. Earth has never been the same since. (Some hypothesize that more complex life forms, such as humans, might never have developed without this atmospheric change.) So to summarize: In the Earth’s geological record, the appearance of high concentrations of manganese marks a major shift in our atmosphere’s composition, from relatively low oxygen abundances to the oxygen-rich atmosphere we see today. The presence of the same types of materials on Mars suggests that something similar happened there. If that’s the case, what formed that oxygen-rich environment?

How Did It Get There?

One way oxygen could have gotten into the Martian atmosphere is from the breakdown of water when Mars was losing its magnetic field. Without a protective magnetic field to shield the surface from ionizing radiation, that radiation split water molecules into hydrogen and oxygen. Mars’ relatively low gravity couldn’t hold onto the very light hydrogen atoms, but the heavier oxygen atoms remained behind. Rocks absorbed much of this oxygen, leading to the rusty red dust that covers the surface today. While Mars’ famous red iron oxides require only a mildly oxidizing environment to form, manganese oxides require a strongly oxidizing environment. Finding manganese oxides suggests that past conditions were far more oxidizing than previously thought.

NASA’s Opportunity rover, which has been exploring Mars since 2004, also recently discovered high-manganese deposits in its landing site thousands of miles from Curiosity, which supports the idea that the conditions needed to form these materials were present well beyond Gale crater.

The Gale Crater captured by the Thermal Emission Imaging System (THEMIS) on NASA's Mars Odyssey orbiter. (Credit: NASA/JPL-Caltech/Arizona State University) Of course, it’s hard to confirm whether the ionizing-radiation scenario I’ve presented here for creating Martian atmospheric oxygen actually occurred. But it’s important to note that this idea represents a departure in our understanding of how planetary atmospheres might become oxygenated. So far, abundant atmospheric oxygen has been treated as a so-called biosignature, or a sign of existing life. The next step in this work is for scientists to better understand the relationship between manganese minerals and life. On Earth, they are highly related—but they certainly don’t need to be. So how can we tell whether the manganese on Mars might actually be made by microbes? The answer is lots and lots of laboratory experiments. If it’s possible to distinguish between manganese oxides produced by life and those produced in a non-biological setting, we can apply that knowledge directly to Martian manganese observations to better understand their origin. In the meantime, we’ll keep our eyes trained on the Martian surface and see what other secrets it has to reveal. Nina Lanza is a staff scientist at Los Alamos National Laboratory, which has built and operated more than 500 spacecraft instruments for national defense. That background gives the Laboratory the expertise to develop discovery-driven instruments like ChemCam and its souped-up successor, SuperCam, also developed by the Laboratory and scheduled for the Mars 2020 rover mission.