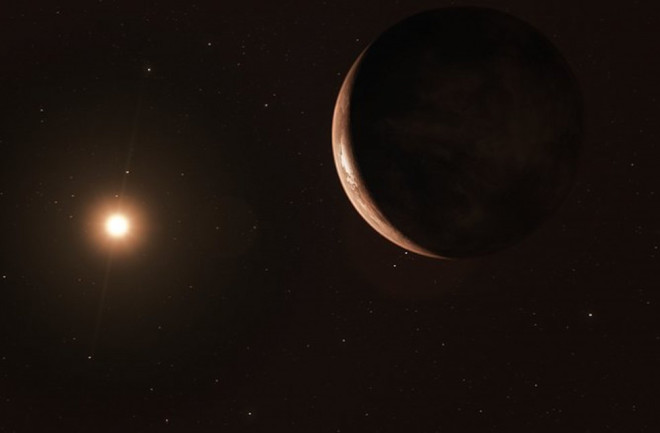 An artist’s interpretation of what Barnard’s star b, a super-Earth recently discovered just six light-years from Earth, may look like. (Credit: ESO/M. Kornmesser)

Late last year, astronomers announced that they’d found a super-Earth around Barnard’s star – one of the closest suns to our own. The discovery of a planet just six light-years away was enough to excite astronomers and the public alike. However, the researchers who found the planet said that they suspected the icy world couldn’t support life.

But now, a group of astronomers are saying such pessimism may be premature. On Earth, geothermal vents produce heat and create unique environments where life thrives in places otherwise difficult to eke out a living – like the frigid, dark deep of the oceans. The team says similar processes could be at work on this world, which is officially cataloged as Barnard b.

Barnard’s star is a low-mass red dwarf , which means it’s small, ancient, and only emits a fraction of the energy our sun puts out. The planet itself is about three times the mass of Earth and orbits the star every 233 days. So, because of its distant orbit around a tiny star, the planet should be a pretty frigid place where water would freezeon the surface.

But what about the water below the surface? On Thursday morning at the 233rd Meeting of the American Astronomical Society in Seattle, Washington, a team of astronomers rekindling the planet’s potential for habitability. They said that if the world also has a large iron/nickel core and enough geothermal activity, features such as volcanic plumes and vents could create “life zones” of liquid water under the world’s frozen surface.

These life zones, according to study co-author Edward Guinan of Villanova University, may be “akin to subsurface lakes found in Antarctica” here on Earth. The closest analog, he said, is Lake Vostok, which sits far below the ice in Antarctica, yet doesn’t freeze over because it’s heated by volcanism. Scientists recently found evidence of life there. Guinan also compared these zones to regions near potential hydrothermal vents on Europa, which very likely holds a completely liquid ocean underneath an icy shell.

Europa, however, is heated by the pull of Jupiter’s hulking gravity, as well as gravity from its neighboring moons. On Barnard b, the heat would come from the planet itself. Though the team estimates the age of Barnard’s star – and its planet – to be about twice that of our own sun and solar system, if the planet hosts a large, hot iron core, its greater mass may also give it enhanced and long-lasting geothermal activity. However, Guinan pointed out during the conference that “there’s not a lot known about super-Earths. Our models are all over the place.”

A liquid iron core, the team’s work states, could further offer protection from its sun’s deadly activity, as M-dwarf stars are known to bathe their surroundings with radiation that can strip their planets’ atmospheres away, particularly early in their lifetimes.

The team targeted Barnard’s star as part of the Villanova Living with a Red Dwarf program, which has been ongoing for the past 20 years. “We were waiting for a planet to be discovered around Barnard’s star,” Guinan said. The researchers determined the age of the star and planet using data stretching back to 2003. Based on measurements of the star’s brightness over time, they determined that it rotates about once every 142 days. From there, they calculated its age – about 8.6 billion years, or roughly twice the sun’s age – using a relationship called the period-age-activity relation for red dwarfs, which links a star’s rotational rate and activity levels to its age.

The team also calculated the amount of X-ray and ultraviolet radiation the star’s planet would receive at its distance of 0.4 astronomical units (1 astronomical unit, or AU, is equal to the Earth-sun distance) to determine the effects on any atmosphere Barnard b might host. They note that this effect is largest when the star is young and more active, and diminishes as the star ages. When an M-dwarf like Barnard’s star is young, they said, it both rotates faster and puts out ultraviolet and X-ray light that is tens to hundreds of times stronger, respectively, than when it is older. Such high levels of radiation would likely damage or destroy the atmosphere on any planets circling it. On the other hand, the young Barnard’s star would have also been more luminous, warming its planet, which was closer in the past, enough for an atmosphere composed of greenhouse gases – however limited in lifetime – to perhaps maintain a surface temperature that could support liquid water, if only briefly.

Currently, Barnard b only receives about 2 percent the radiation Earth receives from the Sun, and is a cold world with a surface temperature of nearly -275 degrees Fahrenheit (-170 degrees Celsius). If it does have any water left today, it would be frozen on the surface, with only the ocean depths potentially habitable in limited zones warmed by vents.

However, there is another possibility: Barnard b could actually be more massive than currently believed. If its mass is truly greater, more than seven Earth masses, it would have enough gravity to hold onto a thick atmosphere of hydrogen and helium, making it not a terrestrial super-Earth, but an ice giant, mini-Neptune instead. An ice giant, Guinan said in the press conference, “would preclude life” unless the planet has a Europa-like moon with tidal heating, which is where life might instead be found in the system, in that case.

Nonetheless, Barnard b remains an excellent candidate for up-and-coming bleeding-edge imaging techniques and the next generation of instruments in development.

“It is on the hairy edge of being imageable,” Guinan said, and “beyond the edge of what can presently be imaged.”

Although more information is needed to determine Barnard b’s mass and potential for habitability, future work may open the door to better understand super-Earths and what their environments – and inhabitants – could be like.