How You Can Help Combat Climate Change

Advice from a fellow of Royal Society on how we, as a society and as individuals, can help the climate recover. 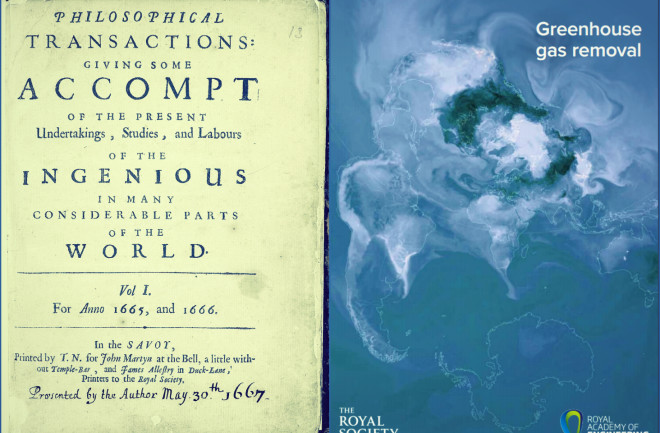 A collage of two images; on the left, the title page from the first Royal Society publication, and on the right, the cover for its recent greenhouse gas removal report.

England’s Royal Society, the national academy founded on November 28, 1660, is still churning out loads of scientific excellence. In this blog, a current fellow shares how we can all help combat climate change. On November 28, 1660, English scientist Christopher Wren spoke at Gresham College in Central London, launching what is now the Royal Society, the U.K.’s independent national science academy.

It’s a fellowship of scientists that’s included the likes of Einstein and Hawkings ,and, more recently, astrophysicist Jocelyn Bell Burnell, computer scientist and software engineer Sophie Wilson, and geochemist Gideon Henderson. Henderson spoke with SciStarter about his ideas on slowing down global warming, a conversation we spotlight in this story.

What Does The Royal Society Do?

The Royal Society has a stated mission to “recognize, promote, and support excellence in science and to encourage the development and use of science for the benefit of humanity.” Its motto is Nullius in verba, or “take nobody’s word for it,” in Latin, which speaks to the members’ passion for the scientific method, or as they say, a determination to, “withstand the domination of authority and to verify all statements by an appeal to facts determined by experiment.”

The Society has been expanding for hundreds of years, and its fellows and staff now work in many scientific sectors like science education and history; promoting diversity; giving grants and policy advice; translating ideas from research to industry; creating international partnerships; running a science and law program; engaging the public; awarding prizes and medals; hosting meetings, conferences, and lectures; and putting forth multiple publications.

The Royal Society’s cardinal publication, Philosophical Transactions, was first released in 1665 and is the oldest continuously-published science journal in the world. It published Isaac Newton’s Principia Mathematica and Benjamin Franklin’s kite experiment demonstrating the electrical nature of lightning. Zoom forward 353 years to 2018, and you’ll find the Royal Society publishing recommendations on one of the most pressing issues of our era: climate change.

The Royal Society on Climate Change

In partnership with the Royal Academy of Engineering, the Royal Society recently released a report on Greenhouse Gas Removal.The paper is based on the premise that cuts to emissions alone will not be enough to keep temperatures at no more than 1.5°C above pre-industrial times,in accord with the 2015 Paris Agreement. The Royal Society finds that to reach these goals, active greenhouse gas removal (GGR) will also have to occur. The report covers methods of greenhouse gas removal, factors affecting their use, and their potential ability to help us meet climate goals.

The possible strategies are more diverse than you might think; they include forestation and habitat restoration, which can increase carbon absorption and storage and decrease carbon release; ocean fertilization, which involves applying nutrients to the ocean to increase photosynthesis and remove atmospheric CO2; enhanced terrestrial weathering, or spreading ground-up silicate rocks over land surfaces, which removes CO2 from the atmosphere; direct air capture and carbon storage, wherein engineered processes capture CO2; and the creation of low-carbon concrete that can store more CO2, along with several other methods. Check out the report summary to explore all the possibilities.

Professor Henderson, who is the chair of the GGR working group, told us that it’s clear that humanity cannot rely on one or two methods alone for the removal of greenhouse gases. “[We] absolutely need to use a suite of several methods. So, I would urge the world to consider all available techniques, and how they might best to used together to deliver large-scale GGR,” he said. Interestingly, the Royal Society’s findings were released shortly before an Intergovernmental Panel on Climate Change (IPCC) special report on very similar topics. Similarly, the IPCC publication called for “rapid, far-reaching and unprecedented changes in all aspects of society,” including massive reductions in emissions and an increase in GGR strategies.

Henderson said the IPCC report confirms the key findings of the Royal Society report. The Royal Society GGR paper makes several recommendations, including that the international community incentivize the removal of atmospheric greenhouse gases through carbon pricing or other similar methods. It recommends the establishment of “international science-based standards for monitoring, reporting and verification for GGR approaches, both of carbon sequestration and of environmental impacts.” Hear more from Henderson on GGR in the UK in the clip below.

What Can We Do to Support Greenhouse Gas Removal?

Henderson told us that on an individual level, climate-aware and -concerned people around the world can support these larger goals by minimizing the amount of GGR necessary. In his words: “[We] need to work as hard as we can to reduce emissions. That will be cheaper and easier than GGR, and lower emissions mean we’ll need to use GGR only for the most tricky emissions to live without. So, it’s worth continuing to think about minimizing unnecessary energy use.”

For example, Henderson recommends that you “reset that thermostat a degree or two, lower meat in your diet, and avoid unnecessary and carbon-intensive travel.” Contacting elected officials about your views, spreading awareness on social media, saving water and using energy-efficient appliances are also great ways to address global warming, according to the Natural Resources Defense Council. And, of course, you can participate in citizen science projects related specifically to climate change, like AQTreks, which records and maps air pollution levels throughout the U.S.; AirVisual, which measures air pollution globally; A Tree’s Life, which monitors community maple trees to explore how climate and urbanization affect tree growth and health; or IceWatchUSA, which involves observing precipitation, ice cover, and wildlife activity to “help scientists analyze climate change and other environmental factors, as well as how people can adapt to those changes.”

ISeeChange, is another option. It’s a global environmental reporting project in partnership with NASA. It has a mobile app that empowers community members to document local conditions, like flooding and urban heat levels. More than 350 years after the Royal Society launched, fellows like Henderson are keeping the fires of scientific passion alive, and citizen scientists around the world can do the same. Every effort to care for the planet counts, and it’s okay to start local. In fact, it’s a great idea.