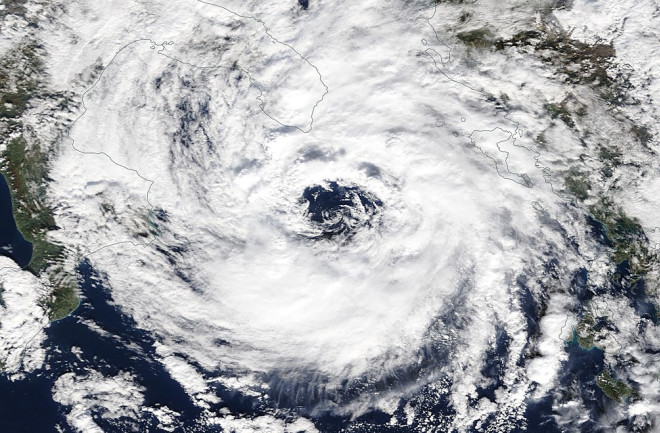 Medicane Numa, captured by Aqua's MODIS image on November 18, 2017. NASA. Trying to model what the cascading impact of anthropogenic climate change might be around the world is challenging to say the least. This isn't a simple relationship where global average temperature goes up and everything changes in concert. As we've seen in the United States with the Polar Vortex, a warmer average global climate can also mean much colder short-term weather as typical patterns are perturbed by the chain of events caused by warming. So, as the dominoes fall in a changing global climate, we need to understand what the long-term impacts of weather phenomena might be as the overall climate heats up over the 21st century. A recent paper inGeophysical Research Letters tries to model the impact of global climate change on Mediterranean hurricanes (or Medicanes). These are like the hurricanes we get off the Atlantic in the U.S., but instead they gain their structure as cyclones within the Mediterranean Ocean. Today, there might be ~1-2 Medicanes per year, many fewer than we see in the average hurricane or typhoon season in other parts of the globe. However, if climate change causes Medicanes to become more frequent or more powerful, then suddenly they become a much larger hazard for Europe. Gonzales-Alemán and others (2019) used a higher-resolution climate model to look at Medicane formation, duration and intensity in the current climate and in future climate as temperatures warm based on a model where we can keep global warming to 4.5 W/m2 through 2100. This translates to ~2-4ºC of warming by 2100 and requires that we reduce carbon dioxide emissions so we don't continue to heat the Earth's surface even more. In their model, they looked at Medicanes in the recent past (to see how well their model fit the known Medicane activity), then the "early future" of 2016-2035 and "late future" of 2081-2100. The end result of their model runs is a bit of good news/bad news. The good news is that, as climate warms, the number of Medicanes will decrease some each year. However, the bad news is that Medicanes are likely to become more intense, with higher winds, more precipitation and longer durations. So, fewer storms but they will be bigger, badder and longer lasting -- especially in the fall. These changes in character of Medicanes won't kick in until the towards the end of the 21st century and if we don't limit carbon dioxide emissions so the climate gets even warmer by 2100, Medicanes could get even more intense. Not only that, but they will form in new locations. Rather than forming in the western and southern Mediterranean as they do today, they will start to form in places like the Ionian Sea between southern Italy and Greece and along Italy's western coast. With the increased precipitation and duration of storms, we would expect more flooding in parts of Europe during the Medicanes as well. This mimics what has been modeled (and seen) for Atlantic hurricanes that make landfall in the U.S. In all, this study shows us yet another potential ramification for our changing climate. We have the ability to slow this change down, should we choose to take it. If not, we will, at the very least, need to spend money on recovering from disasters potentially made worse by a warming planet. The choice really lies with us, today.