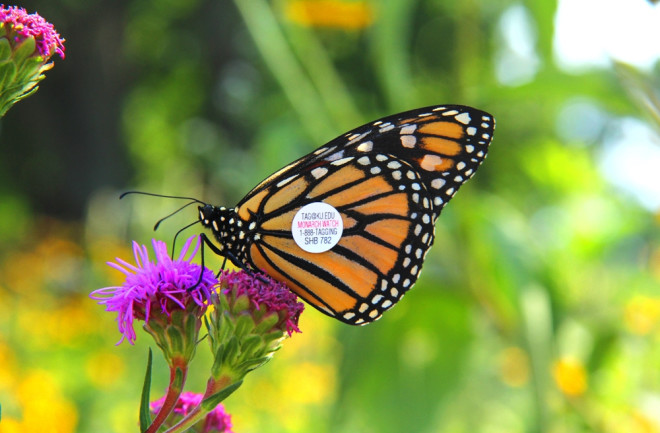 Tagged Monarch Butterfly (Image: Wendy Caldwell) by Eva Lewandowski Gayle Steffy’s fascination with butterflies started when she was thirteen. She found her first monarch caterpillar, brought it home and raised it to adulthood. She’s been hooked ever since, collecting data on monarchs years before joining any of the established monarch citizen science projects. Despite her early interest, which eventually led her to acquire a BS in Environmental Studies, she didn’t initially envision where her work would take her. “I didn’t have a specific goal at the start - I just wanted to record everything I could about each monarch I caught, figuring I could look at it all later and see what it all meant,” she said. Beginning in 1992, she caught, tagged, and released monarch butterflies in Pennsylvania during their annual migration to Mexico, and then recorded if any of the monarchs were later found at their Mexican overwintering sites. After 18 years of collecting migration data, Steffy accomplished something that not many citizen scientists have done before. In August this year, she published her work in a special monarch-themed issue of the Annals of the Entomological Society of America, a well-respected scholarly journal. Citizen scientists are the backbone of many ecological research studies. They collect data frequent and geographically widespread data, and they often share projects results informally with others and recruit new volunteers to a project. However, there are some parts of scientific research with which citizen scientists seldom become involved –things like designing a project, conducting statistical analyses, and writing up research results for publication in a scientific journal. It’s even rarer that a citizen scientist undertakes all of these roles completely on their own, but that’s exactly what Gayle Steffy did. Steffy’s results have intrigued professional scientists and members of the public alike. She found that monarchs that migrated earlier in the fall and those that used inland routes to do so were more likely to be recovered in Mexico, indicating a successful migration. Additionally, she found that monarchs that she collected from the wild as eggs of larvae and raised indoors were smaller and less likely to successfully migrate than wild monarchs that matured outdoors. This result has been of particular interest to monarch enthusiasts and scientists, as many people across the United States capture and rear monarchs inside for education or enjoyment. The work that Steffy did was completely independent and not associated with any project, but she has been a long-time contributor to many citizen science projects. She began joining monarch citizen science projects because she “realized that the only way we were going to figure out monarch migration was to pool a huge amount of data, and I wanted to be part of that,” she said. Since 1997, she has volunteered with the Monarch Larva Monitoring Project, which tracks the density of monarch larvae across the country and compiles data on rates of monarch parasitism, and in 1998 she began tagging monarchs for Monarch Watch.. Over the years, she has also volunteered with a project in New Jersey that tracks the fall monarch migration, called the Cape May Monarch Monitoring Project. And when a new citizen science project called Monarch Health began studying a common monarch disease in 2006, Steffy naturally stepped up. The contacts she made through her participation in monarch citizen science projects proved useful when publishing her own research, as she was able to seek advice from professional scientists that she had met over the years. While their support was helpful, she still encountered a number of barriers throughout the process of analyzing and publishing her results as a citizen scientist. From finding time outside her fulltime job to work on the project, to accessing statistical software and costly journal articles for background research, Steffy had to overcome issues that aren’t normally present for researchers associated with a formal institution. “The publishing process was extremely difficult for me,” she said. “The system is definitely set up for people in academia. In fact, when I submitted my paper, the school and program you were affiliated with were mandatory fields. I had to write “see cover letter” in the blank. I wasn’t at all sure if they would take me seriously.” However, her efforts were taken seriously and her hard work eventually paid off when her results were finally published. Steffy hopes that she’ll serve as an inspiration for other citizen scientists who want to follow in her footsteps. When asked what advice she might have for those who would like to conduct their own research and publish the results, she urged others like her to teach themselves the skills they need to do research, and said, “Just go for it! You don’t have to wait for a job doing what you love, you can do it anyway.”

Eva Lewandowski is a PhD candidate in the Conservation Biology Graduate Program at the University of Minnesota. She is part of the Monarch Lab, where she studies citizen science and conservation education.